One language among many 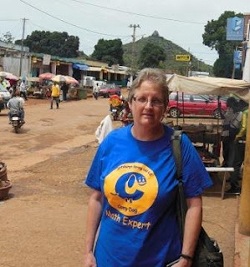 Susan Smith on on a main street of N’gaoundere, Cameroon.

I will be going to Bohong shortly to learn Sango. Bohong is a small town about 35 kilometers north of Bouar, which is two hours east of Baboua (my town).

So why do I need to learn Sango when I already speak French?

French is the colonial language. That means that a lot of government business, secondary schools, and other businesses use French. It is an official language in the Central African Republic. People, however, don’t learn French until they go to school. Most primary schools begin instruction in Sango and students then learn French. Too many children, though, never get the chance to go to school, so they don’t learn French.  The literacy rate is between 50 and 60 percent (depending on which reference you check).  That means almost half the population cannot read and write in any language and are unlikely to know French. This number includes a disproportionate number of girls and women.

Also, Sango is the national African language in CAR. It is rare in Africa that there is one African language in a country that most everyone speaks and can be an official language. I have been told that since Sango was the language of commerce even before the French came, everyone learned to speak it.

Now imagine this: Children are born and begin to learn their maternal language (the one for their ethnic group). Not too long after that, they learn Sango. All of these languages are oral, by the way. They have now been written down as missionaries worked to translate the Bible into their languages. If there are other ethnic groups in the area, children also learn those. Then, if they have the chance, children go to school and learn French.  If they continue beyond elementary school, they study English or some other European language! (And, we from the U.S. are resistant to learning any language other than English!)

I am learning Sango, therefore, to be able to talk to people in their own language — to better understand their world view. In working with the directors of the education programs of the church and even in working with teachers, I will speak French, for the most part. But, when working with parents and leaders in villages, Sango will be essential. Also, when I have the opportunity to be in elementary classrooms, the primary language will be Sango.

I am also going to another town to have more contact with Central Africans.  I hope, too, by being immersed in the culture for a month, I will be able to learn other cultural aspects, especially nonverbal communication.  I will keep my ears open, but also my eyes and all my other senses.

Next Post: Cindy and Sam Wolff: A life in missions »

One Response to 'One language among many'