Ole masks at a pancake supper

Posted on May 6, 2014 by Global Mission Support 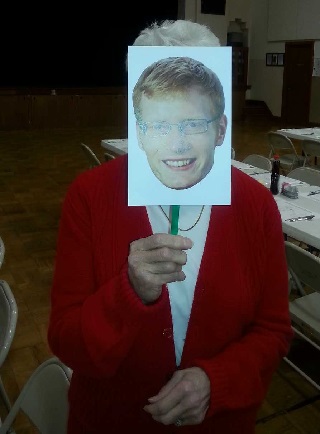 At a pancake supper at St. Paul’s Lutheran Church in Waverly, Iowa, participants received a cardboard mask with the image of Ole Schenk, an ELCA Young Adult in Global Mission (YAGM) serving in Hungary. Those who received the masks were told about Ole’s ministry and invited to take their masks home, share this information about Ole with family and friends, and then use the masks as a daily reminder to pray for missionaries. St. Paul’s Lutheran Church sponsors Ole Schenk with prayers, communication and financial gifts.

As part of his YAGM service, Ole works with sixth-grade students in a parochial school sponsored by the Lutheran church in Hungary, which has a companion-synod relationship with the ELCA Northeastern Iowa Synod. This synod encourages its congregations to sponsor the four YAGMs in Hungary and then make connections between its youth and the YAGMs. For example, the sixth graders in Ole’s class in Hungary have become pen pals with the sixth graders at St. Paul’s Lutheran School in Waverly. Youth groups, confirmation classes and Sunday schools have all become involved in this Youth for YAGM initiative, which uses Skype, YouTube, Facebook and Twitter to make ongoing digital connections between youth and YAGMs.

Many synods and congregations across the ELCA are becoming involved in similar Youth for YAGM initiatives to support the 59 YAGMs serving around the world this year. Beginning in May 2014, sponsors will be sought to support an anticipated 65 new YAGMs who will begin service in August in eight country groups, including a new one in Rwanda, Africa.

To learn about how you, your congregation or youth ministry can sponsor a YAGM, see www.ELCA.org/YAGMsupport or contact globalchurch@elca.org.

Note: The pancake supper featuring the masks was originally planned for Shrove Tuesday before Lent but was postponed due to a blizzard until after Easter. The photo is furnished by the Rev. Mark Anderson, assistant to the bishop of the Northeastern Iowa Synod.