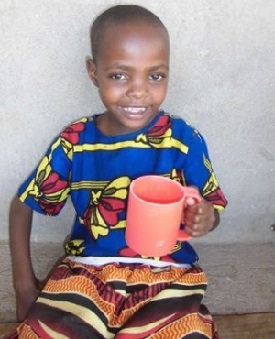 Elizabeth’s recovery is called a miracle
by the doctors.

Dr. Stephen and Bethany Friberg are ELCA missionaries in Tanzania. To support the Fribergs, or another of the ELCA’s over 240 missionaries in the global church, click here.

One of my (Steve) roles as a mission doctor in rural Tanzania is to link patients with medical systems that can deal with difficult problems. This includes surgery for cleft lip/pallet, cataracts, osteomyelitis, burn contractures and trauma. Most of our patients would not get to specialized care without our help making the connections.

Little 7-year-old Elizabeth is a Maasai girl from Ketumbeine who underwent successful heart surgery to replace a mitral valve in November 2013. Rheumatic heart disease gradually destroyed her mitral valve and put her into serious heart failure. It is exciting that Tenwek, a mission hospital in Kenya, has started doing heart surgery at a very reduced price. Elizabeth’s parents sold some of their livestock to raise half the cost of her $3,000 medical bill. We were given money to cover the rest. Elizabeth had angels watching over her. At the end of the surgery her stunned heart developed ventricular fibrillation for 45 minutes. She had to be kept on bypass and her surgical team was uncertain if she would survive. Very slowly, her heart came back to normal function. She was walking in a few days and discharged after six days. Her surgeon calls her a miracle. Mission doctors know it is God who does the healing and pray before every operation. Elizabeth comes for monthly checkups and now has normal heart function.

Timotheo, a 3-year-old Maasai boy, was in the hospital with Elizabeth. He had cardiac catheterization to open a very tight aortic valve. He was not growing and was too weak to play with the other kids. Immediately after valvuloplasty his father could see that Timotheo was breathing more easily. The next day he had new energy. Now Timotheo is growing and can run as fast as his friends.

Four years ago, the Maasai women of the Naapok Bead Project in Ketumbeine, northern Tanzania, voiced their dream for each one to have a home with a corrugated metal roof. To do this, they

needed to turn beaded bracelets into bati. “Bati” is the Swahili word for a corrugated-metal roofing sheet.

Now, 4,800 bracelets later, plus a lot of work purchasing cedar poles, collecting branches for lath, plastering walls, and saving for doors, 57 women have homes with metal roofs. All of you who purchased bracelets contributed to making this happen. ASANTE SANA!