Music for a Troubled Soul 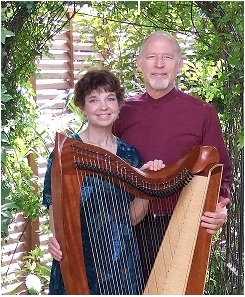 Jim and Carol Sack send greetings from Tokyo. Their ELCA ministry includes Pastoral Harp, in which Carol offers a prayerful presence through voice and harp one-on-one at a person’s bedside. She tells of a recent moving experience at a hospice where she volunteers each week:

Tanaka (not his real name) was not dying physically, but he had become completely hopeless and full of despair, so he was dying in his spirit.

Seventeen years ago he had committed a horrendous murder that had become famous in all the newspapers around Japan.  He had been released after many years in prison, but now he was struggling in his daily life and had come to the end of his rope.

We invited Tanaka san to lie down on his bed and relax. At first I played only the harp for a few minutes. His body was stiff, his hands were clenched, and his face looked tense.  Then I began to sing with the harp. For some reason, when the voice began, Tanaka san just seemed to melt — and then he started to cry and cry and cry. I continued the music for about a half hour, and he just kept weeping.

When the music ended, he said something amazing: “A long time ago, I did a terrible thing. I am so sorry, so sorry, so sorry…”   We usually do not use many spoken words at the bedside but, wearing my cross, I said only, “We all do things that we regret. But we are loved. And you are loved.”  And then we left, shaking hands, by this time all of us moved to tears.

Later I realized what I had been singing to Tanaka san at that time.  It was an “Agnus Dei,” a Gregorian chant in Latin, which means “Lamb of God, you take away the sin of the world, have mercy on us.”

Somehow the meaning of this Gregorian chant seemed to enter into his heart directly through the Holy Spirit. Tanaka san knew somehow that his sin had been taken away, and he responded with confession and repentance. It was a very mysterious and holy moment for me.

Next Post: Looking Back on a Year in Bolivia »