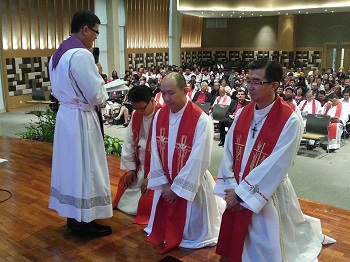 This year marks the 60th anniversary of the establishment of the Lutheran Church in Malaysia (at the time, Lutheran Church of Malaysia and Singapore). This special occasion was celebrated at the church’s 32nd General Assembly at the end of August.

The Lutheran Church in Malaysia was birthed from missionary efforts of the United Lutheran Church in America. Special thanks were expressed during the assembly for the work of missionaries who engaged in pioneering evangelism and helped build up the church. As part of this anniversary, a book, “A String of Pearls,” by Jeremy Fisher (son of the Malaysian church’s first bishop, Carl Fisher), was launched. The book features interviews and stories from former missionaries to Malaysia.

A new bishop, the Rev. Aaron Yap, was elected and installed during the closing worship of the assembly, and the Rev. Darrel Peterson — assistant to the bishop of the ELCA Southeastern Synod, which is companioned with the Lutheran Church in Malaysia —  preached. Additionally, three pastors were ordained and one new congregation was welcomed into the church.

This activity reflects the continued vitality of the church in West Malaysia. The church continues to grow and is increasingly multicultural: Chinese, English and Malay are spoken, with an ethnic makeup of Chinese, Indian, Orang Asli (indigenous peoples) and others from beyond Asia. The newest organized congregation is one more in a string of new congregations from among the Orang Asli.

Meanwhile, mission outreach goes beyond the domestic as the Lutheran Church in Malaysia engages in mission in Myanmar, Vietnam and China. The church has requested assistance from the ELCA for its outreach with the Orang Asli and in neighboring Myanmar. These requests will become part of “Always Being Made New: the Campaign for the Evangelical Lutheran Church in America,” which was just approved by the ELCA Churchwide Assembly in Pittsburgh. For more information about this campaign, please contact globalchurch@elca.org.