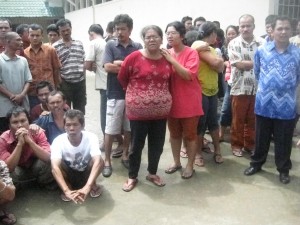 Persons living with HIV/AIDS in Indonesia

Megan Bradfield (ELCA Global Mission staff), Phil Baker (Regional Representative) and I were visiting HIV/AIDS projects in Indonesia implemented by the HKBP – the largest Lutheran Church in Asia. One stop was at a local prison where the church works among the people who have been imprisoned for various crimes including drug abuse and sex offenses.

As we came out of the prison, Megan asked me what was next. I replied “lunch with sex workers.” Megan started laughing. I wondered what it was all about and Phil was curious, too. In response, she replied, “Because you said ‘lunch with sex workers.’” I said this was true as our next program was to have lunch at a restaurant with sex workers and drug abusers. Megan said “it was not because of what you said; I was laughing because the way you said it.”

We did meet up with a dozen men and women who had been invited by the HIV/AIDS staff. Meeting for lunch was an incentive for them to come to talk to us. After lunch we went back to the project office to have a conversation with these people.

A man described that he was HIV positive and his wife was not only HIV positive, but she also had tuberculosis. They have four young children; two of them HIV positive. He was in tears when he described that his wife was unable to work because of her poor health and that the entire family was dependent on his income alone. He told us how hard he works for a small income driving a mini cab as he pays major portion of his earnings to the owner of the mini cab. He told us that he is grateful for the treatment and care he receives from the HIV/AIDS project, though that was insufficient at times.

A newly married couple told their story about how they realized that the husband was HIV positive immediately after their marriage. They do not want to have any children at this point. The wife told us that she is trying to support her husband and praying for his healing.

Two young women involved in sex trade told us about their painful stories. One of them was HIV positive. They told us the stories of how poverty and hunger brought them to this trade, and how they don’t like what they do but they do not have any other alternatives.

As we prepare to celebrate Christmas, with the abundance we enjoy in our lives, let us not forget the true meaning of the celebration – the birth of Jesus Christ, who came to this world, walked amongst the sick and the downtrodden, and died on the cross for us all.  No matter what differences we have among us, one issue remains a constant – there are many who need our help and our prayers.  Pray that we all make a commitment for the upcoming New Year that we will come together as one and serve those who the world sees as “one of these least.”