Learning the Language Has its Moments

Recently we found an old Larry Larson calendar with a cartoon of two Martians emerging from their flying saucer, trying to talk to a handful of curious humans. 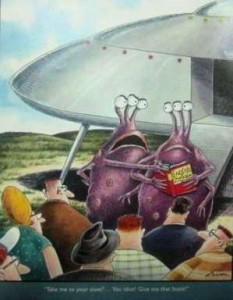 One of the Martians is holding an English-Martian dictionary in his hands, the other Martian is obviously annoyed and is reaching for the dictionary as he says, “Take me to your stove? … You idiot! Give me that book!”

That’s the shape of Linda’s and my lives these days as we try to learn and speak Arabic. Our language skills are growing.  We can say many things: “I’d like to buy some potatoes,” and, “I know it’s hot, but would you turn down the air conditioning, please.” That’s progress, and we’re thankful for it.

On the other hand, Arabic speakers love to use consonants that don’t exist in Western languages, things that come from way down in one’s throat that are almost impossible for us to say.  I personally find the word for “sit” so difficult that I would rather just stand.  “Spoon” is tricky (better to eat with a knife), and the verb “know” can easily be mispronounced to mean something unspeakable in the language. The other morning as I tried to greet our faculty secretaries with a witty hello, I was bewildered by uproarious laughter.  I had just called them our dancing girls. 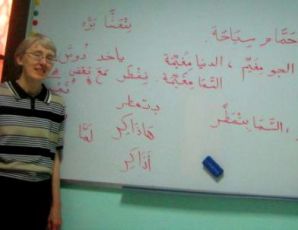 That’s not the worst of it. Neither my scholarly Dutch colleague nor my Egyptian tutor understood the cartoon.  They just don’t know that phrase, “Take me to your leader.” Not only is my mouth handicapped when it comes to making the elegant Arabic sounds; culture doesn’t necessarily translate, either.

And we expect to help one another share the Gospel?!  Surely the missionary enterprise is an audacious business!
Yet St. Paul claimed that God’s power is made perfect in weakness, and no one is weaker than one who can’t even talk right – like us!   Yet God often uses these moments of mispronunciation and awkwardness to bring good humor and communicate things that really matter!  Thanks be to God!
The Rev. Mark and Linda Nygard are ELCA missionaries working at the  Evangelical Theological Seminary in Cairo.