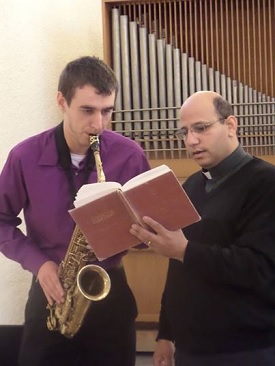 Kevin Beebe is spending a year in the Holy Land through the ELCA Young Adults in Global Mission program. In this excerpt from his blog, Walking in Faith, he writes about living among the guns commonly seen on the streets of the Holy Land. To support Kevin, or others in the program, go here.

My hometown of Pullman, Wash., is a nice town. … It has a small-town atmosphere with good people. I love my hometown. I have never felt unsafe walking the streets late at night – and that isn’t because I am 6-foot4. Pullman is a great place. The best part is its connection to the farms all around. … The fertile soil is home to many wheat farms. The golden stalks fill many of my childhood memories. I spent many days and nights on the farms of family friends. I bottle-fed calves, walked through the fields spraying weeds, and drove four-wheelers. I love to take my dog for long walks on gravel and dirt roads.

One part of open fields and country life is hunting. I grew up hunting. People have guns in Pullman. I still remember my days in hunters’ safety classes at the local Grange, my first hunting trip with my dad and brother, and the first deer I killed. My dad bought me a .270 Remington rifle. We have a gun safe in my parents’ home. Guns were part of my life. I cleaned my dad’s shotguns during breaks. That was my life growing up.

I see a lot of guns here in Israel and Palestine too, but they are different than what we had at home. Very different.

Here I see M-4s, M-16s, TAR-21, and AK-47s. A lot of them. I also see a lot of handguns. Most weapons are carried by uniformed soldiers or private security personnel. There are some that are carried by average people. There are more strict standards of gun control. People have to either be soldiers or have reached a certain rank in the military to own a private gun. Still, I see a lot of guns. There are the heavily armed soldiers at checkpoints, uniformed soldiers waiting for the bus, people at the Western Wall. I do not see as many as I get to the coast. Tel Aviv has a lot of soldiers but a less visible arsenal. I do see some guns in Tel Aviv, like an M-16 touting soldier at the Diaspora Museum. I see less AK-47s. It is mostly Palestinian special police that I see armed with those. They are around town, but I see them less often.

There is a big difference between the guns we had at home and the guns I see here.

Our rifles at home are built for hunting. We took them out to feed ourselves. Occasionally we would go target shooting to sight in the scopes. The M-4s, M-16s, TAR-21s and various handguns are made for one purpose.

They are made to kill people.

There is no other use for them. People claim they are for defense, but you harm people to defend yourself. They are designed to make a small entry hole in the flesh of another human being and cause massive damage to the unseen internal organs. They fire hot lead to kill. Nothing more.

Do I feel unsafe around the guns? No. As I said, I have grown up with guns my whole life. I know those holding them are trained in their operation. Oddly, if they do make me nervous, I am more nervous of the American-made Israeli soldiers than the Palestinian police. Guns do not worry me.

What worries me is how accustomed to these objects of destruction, these killing machines, I have become. It does not shock me to see weapons around town or on soldiers as they wait for buses. I see them a lot. They do not shock me anymore. Armed soldiers in uniform are everyday people to me. I don’t give it a second glance anymore.