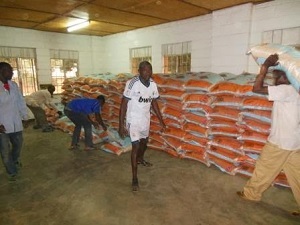 ​
Students at the Bible school in Garoua Boulai help
unload the 500 sacks of rice and 300 boxes of oil, which
will be temporarily stored at the school.

Susan Smith is an ELCA missionary assigned to the Central African Republic. Due to the current social unrest, she is working out of Cameroon. A recent entry in her blog describes the obstacles in getting aid to those who need it. To support Susan, or another of the ELCA’s over 240 missionaries in the global church, click here.

Imagine you are a displaced person – one in five of Central Africans are. You had to leave home in a hurry – maybe with only the clothes on your back, maybe with a few other things. Think about the immense problems you would face – that Central Africans are facing daily. Put aside the fear of continued attacks, although, really, how do you put aside fear that comes from recent, violent events? But let’s put it aside for now. After all the interim president and the prime minister have stepped down and maybe the violence will stop.

But the list of other immediate problems is still immense. Where do you find food? Water? Yes, we would prefer that it be clean drinking water, but when you are desperate, any water? Where do you get money? There are no ATM machines in a cash society. If you couldn’t bring it with you, there is no money. Sanitation comes far down the list of priorities. Where do you relieve yourself? What are you contaminating in using any available space? Fortunately, it is currently the dry season so there are fewer mosquitoes to carry diseases. Heath care, though, is another huge concern – and often out of reach for displaced people.

The Central African Republic’s population is about 4.5 million and 20 percent of them are displaced. That’s 900,000 people. Can you imagine how much food it takes to feed 900,000 for ONE day?

We have to start somewhere. Lots of organizations are working on the problems. One of them is the ELCA that has sent money for humanitarian aid. So, two officials from the central administration of the Église Évangélique Luthérienne – République Centrafricaine, went from Bouar, Central African Republic, to Yaoundé, Cameroon, to arrange to buy and transport food with the assistance of the ELCA regional representative. A quick trip – go on Wednesday and come back Friday (well, in theory).

But life is complicated and it is especially complicated here. Patrick and Antoine arrived in Yaoundé with little difficulty. Complications, though! One was not feeling well and needed extra time to rest and recuperate. The other went around town making arrangements to buy 50-kilogram sacks of rice (that’s over 100 pounds each) and many boxes of oil. Then they must work out how to transport them. They left Yaoundé on Friday as scheduled.

Upon arrival in Bertoua, complications. Every customs office in town (it seems there are many!) needed to talk to them and make them fill out paperwork. Two huge trucks had been loaded and headed north – one on Friday and the other Saturday. These trucks are slower and have more customs formalities at various barriers. (We don’t have barriers like this in the U.S. They are a cross between a toll booth and a border crossing stop. Near some are truck weigh stations, too.)

The trucks arrived in Garoua Boulai, Cameroon, Sunday night and Monday afternoon. Patrick and Antoine also got back Monday afternoon. But – another complication. The insecurity I mentioned earlier has not yet calmed down after the recent change in governmental leadership. There are still problems in Cantonnier (the Central African town on the border) and Seleka and Anti-Balaka are waiting for negotiations. The result is that the border is closed.

One truck is owned and operated by a Central African headed to Bouar and Bangui. He is waiting with this loaded truck in the truck stop in Garoua Boulai. Once the border opens, across he goes. The other truck is Cameroonian and the driver can’t afford to sit with a loaded truck for an indefinite time. And, he’s not so sure he wants to drive into the Central African Republic  anyway!

Now we wait: for the border to open, to find a second truck, to reload the truck.

And we hope. The food was bought to help feed about 5,000 refugees (a drop in the 900,000 bucket), most of them from Bohong, but currently living in and around Bouar. We hope that the number of refugees has not increased dramatically so that the food will stretch. We hope that they can find other foods to complete dietary needs. We hope that more aid comes quickly enough so that there will be more food when this runs out.

Life is complicated, but we live in hope. We must act – even if the actions are a drop in the bucket. Many drops together fill the bucket. People coming together in peace WILL change the situation – it must.