The Rev. Paula Stecker is an ELCA missionary in Haiti. Here is a condensed version of some her thoughts on Haiti two years after the 2010 earthquake. To support Paula, or another of the ELCA’s 230 missionaries, go to www.elca.org/missionarysponsorship. 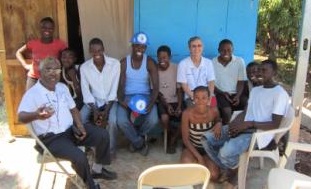 LWF staff chat with T-shelter recipients on a shelter porch.

March 11, 2012
The following piece was one I planned to share with you early in February. The first draft written Jan. 13, but life got busy and suddenly I was home in Iowa, gathering with my family as my father was dying from complications of a knee replacement surgery. Dad would have been 83 this week and he seemed much too strong to die. We were not ready to say goodbye, but we have felt grace surrounding us as we try. Finishing this story, the strength of the cloud of witnesses shines for me even more boldly. We miss you, Dad.

As I flew back onto the island in January, I was amazed that there really was a visible change over the past year, even from the air.  But, the change that moved me the most was to discover that those who survived Jan. 12 , 2010, have come a long way toward weaving the earthquake and its consequences into the lives they are reclaiming.

We held a special memorial service at the Lutheran World Federation (LWF) office on Jan. 13. About 30 members of the staff and some visitors gathered to remember, to pray, and to share what this earthquake has come to mean in their lives. As we planned the service, we did not imagine that people would share more than a few words, or the name of a loved one lost. We heard the hope of scripture. We prayed for one another and then the invitation to share was passed around the circle.

Ruth Esther, our psychosocial officer, was helping to facilitate this sharing and she went first. Ruth told about being at St. Trinity School teaching music to eight little ones. She escaped with all the children and now associates Jan. 12 with God’s grace that helped get all of them and herself out of the building which was destroyed. She passed the talking stone to the left. Would anybody else speak?

Not only did they speak, but they told their goudou goudou stories as integrated pieces of their very narrative lives. We heard of heroic walks and futile searches for hospitals, of holding dying cousins in their arms and collapsing in the street at the sight of one’s children safe and sound with neighbors. Some had had troubling visions or dreams beforehand. There were memories of the last words exchanged and the agony of not being able to contact loved ones. Others stressed the importance of knowing we are alive today for a purpose; how important it is to make sure Haiti will be better prepared next time. They witnessed to how strangers had helped them, offering a bed sheet or a hand out of the rubble.

For over two hours we listened to these sacred stories: an unpolished mix of English, French and Kreyol translations, sharing the pain, letting the tears flow, even as we marveled at the healing. These were not the same people whose lives were shaken two years ago at 4:53 in the afternoon. They had been transformed and they knew it.