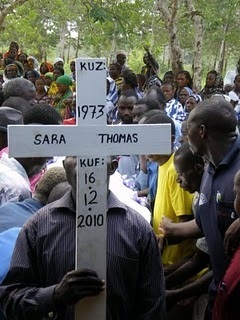 Josh and Sue Magyar recently attended and photographed a funeral in Tanzania, where they are serving as ELCA missionaries. Here are some of their impressions:

As far as I know, it is uncommon in the United States to photograph a funeral. While a few shots of family and friends (the reunion aspect of the funeral) might be discreetly taken at the reception, I am fairly sure it is generally not appreciated to have photographers taking invasive pictures during the funeral procession and ceremony. Yet, continually we are reminded here in Tanzania that cultural stigmas are not universal. What is expected to happen (or to not happen) in various social settings is frequently quite different as one crosses into a different culture.

This has led to many awkward-feeling and sometimes humorous experiences for us as we cannot help but base what is “normal” on the norms of our home culture. Yet, we have learned to take care to listen, to ask many questions and to trust our new Tanzanian friends to tell us what is appropriate… as not to offend.

So, when we were recently asked by a colleague of mine, who is also a Lutheran pastor, to do just that—to photograph the funeral of his sister, we reluctantly accepted. In retrospect, no one seemed to mind in the slightest. Another Tanzanian pastor who was attending the funeral helped us, taking up one of our cameras to get some really close shots (I guess we were too shy). What we came away with was the documentation of a Christian funeral in an authentic Tanzanian village. It is our hope that, using this funeral as a lens, you might be able to see and appreciate the beauty of the Tanzanian culture.

Too see all of the photos taken at the funeral, go to Josh and Sue’s blog at joshandsue.blogspot.com.