Thanks, First and Roseville Lutheran 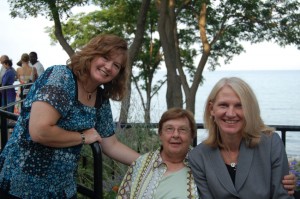 First Lutheran (Freeport, Ill.) and  Roseville Lutheran (Roseville, Minn.) were recognized at the 2010 Summer Missionary Conference for their contributions to ELCA Missionary Sponsorship.

CHICAGO (ELCA) — Two congregations of the Evangelical Lutheran Church in America (ELCA) have given a combined total of more than $830,000 to support global ministries for one reason — to join hands with Lutherans around the world to “teach, preach, heal, build, grow, give and receive.”
First Lutheran Church in Freeport, Ill., has given more than $400,000 and Roseville Lutheran Church in Roseville, Minn., has given more than $430,000 to support Lutheran missionaries and ministries overseas.
“Giving is a big part of what we do as Christians,” said David Tetzlaff, a member of Roseville since 1995.
“What has made me happy over the years is that our congregation tithes and that we have always been supportive of mission and outreach. Our congregation gives 50 percent to support local ministries and 50 percent for international ministries,” said Tetzlaff.
But Roseville’s support is more than financial, said Tetzlaff. “We invite missionaries to visit our congregation and share with us about their work, how things are going and how we can help. This helps our congregation put a face to the name of whom we are supporting. Missionaries also tell us how our support helps produce change in the areas where they work.”
Members of Roseville have supported ELCA missionaries in Cameroon, Peru and Palestine. They have also supported Lutheran schools in the Middle East, medical ministries in Tanzania, and the ELCA Young Adults in Global Mission program.
“Engaging in global mission is foundation of who we are as a congregation,” said the Rev. David W. Hanson, pastor of Roseville.
Members of First Lutheran Church have set up an endowment fund to support global ministries.
“A former member of the congregation bequeathed over $1 million to fund projects other than the congregation’s day-to-day operating expenses,” said Steve Ursin, a member of First.
A significant percentage of the endowment “allows our ministry to reach around the world,” said the Rev. Keith D. Johnson, pastor of First.
Members of First have supported ELCA missionaries in Germany, Russia and Tanzania. They have also supported La Frontera Ministries in Mexico, Augusta Victoria Hospital in Palestine, the Contact and Resource Center in Beirut and other ministries. The congregation supports the ELCA World Hunger Appeal, ELCA domestic and international disaster response, and The Lutheran World Federation, based in Geneva.
First Lutheran Church and Roseville Lutheran Church were honored at a banquet during the 2010 ELCA Summer Missionary Conference at Carthage College, Kenosha, Wis. Also honored were missionaries who have completed service. Carthage is one of 26 colleges and universities of the ELCA.
“The generous support of congregations helps ELCA missionaries join hands with neighbors and companion churches around the world to teach, preach, heal, build, grow, give and receive,” said the Rev. Twila Schock, director for Global Mission Support, ELCA Global Mission.