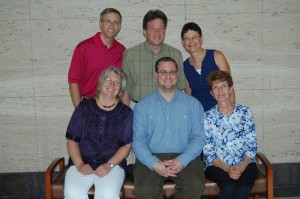 The Global Mission Middle East and Europe staff team met in July, 2010, to strategize about their work together.  Pastor Julie Rowe provided these introductions:

The Rev. Robert Smith (first row center), the EME Desk Director, has a lot of ground to cover as his job takes him from the United Kingdom in the northwest to Vlaidavostok in the northeast and as far south as Palestine and Cairo. Egypt.  Some main areas of focus for the EME desk are to bring justice and reconciliation for refugees and displaced people, such as St Andrews Refugee Services in Cairo, which works with Sudanese refugees, or those dealing with Roma (gypsy) populations, which are subject to great discrimination in Europe.

The Rev. Peter Johnson* (upper row left) administers the Cairo program as well as serves as the pastor of St. Andrew’s International Congregation.

Pastor Arden Haug * (upper row center) is the Regional Representative in Europe and serves as the pastor of the International Congregation in Bratislava, where he also supervises the almost 20 ELCA missionaries, whose salaries are paid by the European governments, that serve as English teachers in Slovakia and Poland.  The focus of the desk is toward building capacity for companions in Russia, the Baltics and Central and Eastern Europe while still maintaining support of international congregations in Western Europe as well.

Carol LaHurd  (upper row right) is the Coordinator of the Peace Not Walls Campaign that carries out the ELCA’s Middle East strategy to advocate for a just, lasting peace in Palestine and Israel.

The Rev. Julie Rowe ( first row left), a former missionary in Jerusalem for four years, works with Companion Synods and Working Groups relating to Europe and the Middle East, the Peace Not Walls Campaign and other website work.

The Rev. Peter and Michele Johnson and the Rev.  Arden and Jana Haug are among our 225+ ELCA missionaries serving in 50 countries.  Learn how you and your congregation can provide prayer, financial and encouraging support for ELCA missionaries like the Johnsons and Haugs at www.elca.org/missionarysponsorship.