Between the water imagery and the “Easter egg bugs,” I think this post by Mary Beth Oyebade, ELCA missionary serving in Nigeria, would be a great Easter Vigil (April 3) illustration.  Mary Beth writes that her son Tobi “gets goosebumps” when he sees the bugs.  I can see why!  Isn’t God’s creation amazing?!  Isn’t it awesome to be part of God’s redeeming work in the world?! —Sue Edison-Swift

“…and the floodgates of the heavens were opened. And rain fell on the earth…” (Genesis 7).

We have had three big rains in the last three days. It’s a little bit early for the rainy season to begin, but we’re tired of dust and heat, so bring it on! It’s been about five months since it last rained. The last few weeks have been very hot and muggy, so the rain definitely brought relief. I’m guessing that the temperature dropped from 90 degrees to 70 degrees.

For some reason, the change in weather made me want to exercise. The past two mornings I got up early and did some walking within our compound. It felt great. The first morning after the rain, Tobi and I spent some time 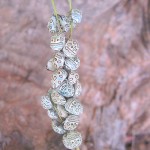 observing changes that had taken place in nature. As we walked through the compound, we noticed that the Easter egg bugs were out. Now, I have no idea what these things are actually called, and I don’t know anyone besides us who calls them that, but they come out every year around Easter time.

Tobi says he gets goosebumps just looking at them. They are curious little creatures.

One Response to 'Early rains and “Easter egg bugs”'