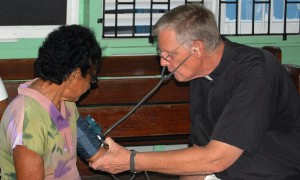 CHICAGO (ELCA) — Some pastors, particularly bishops in the Evangelical Lutheran Church in America (ELCA), wear a cross. But the Rev. Richard L. Young bears a stethoscope. Serving as pastor of six Lutheran congregations in Guyana, Young is also a licensed physician tending simultaneously to the spiritual and medical well-being of people.
“My call with the Evangelical Lutheran Church in Guyana through ELCA Global Mission is 50 percent medical and 50 percent pastoral work,” said Young. Although the need for medical care can be great in Guyana, people there have tended to focus more on Young’s call as pastor.
“I was struck by the fact that the spiritual needs of Guyanese were often placed above their physical ones. Prayer will often be asked first and medicine comes second,” he said.
Young is an ELCA missionary serving in the Evangelical Lutheran Church in Guyana (ELCG). The ELCG and ELCA are members of the Lutheran World Federation, Geneva, and both share a church-to-church relationship through ELCA Global Mission. The ELCG has 5,000 members in 46 congregations in 13 multi-point parishes.
“There have been North American missionary pastors working in the ELCG (since) about 1890,” said Young. “It’s a ‘normal’ thing for them to have missionary pastors serving the church.”
Work as a parish pastor in Guyana is similar to the work of an “American pastor, with some exceptions and additions,” according to Young. “I lead worship and preach, supervise Sunday school, men’s groups, women’s groups, youth groups, run council meetings, visit in homes and hospitals, conduct funerals and weddings, fill out forms and statistical reports.”
But the difference is that Guyanese pastors are “given more responsibility for decision-making in the congregation. They are considered to know the right way to do everything and expected simply to give directions,” said Young.
Among his responsibilities, Young said his favorite thing is witnessing “Aha!” moments “when someone comprehends for the first time that the gospel is really for them.”
Originally from Oregon, Young came to Guyana in 2001. Before entering Luther Seminary, St. Paul, Minn., in 1997, he was an obstetrician/gynecologist in Elko, Nev. Luther is one of eight ELCA seminaries.
“I came to Guyana directly out of seminary. Ever since, I have simultaneously been trying to learn how to live in Guyana and how to be a pastor,” he said.
Young’s medical work is practiced at various places of need that he has identified over the years.
“When I travel out to give medical care, I carry my little black bag,” he said. In it, there is “a little black Bible and a supply of medications which are dispensed free of charge,” said Young. “I am able to purchase medications wholesale in Guyana through funds supplied to me by (ELCA) World Hunger.”
Young regularly treats members of his congregations and holds a monthly clinic. He also serves at various community clinics, shelters and homes “for the aged and poor.” And “over the years, it has also fallen to me to be the local coordinator for Lutheran medical teams coming to Guyana on mission trips. This requires finding sites to visit and arranging transportation, housing and other logistics.”
“Teaching is also an important part of my medical work,” said Young. “The medical culture in Guyana can often be paternalistic. People leave hospital clinics with a prescription and a pat on the head but often do not know their diagnosis, how they got it, what the prognosis is, what medicine they have been given, what they can do to help or prevent the problem.”
Young said that he was taught “very early in medical school that the word ‘doctor’ means ‘teacher’ not ‘healer.’ Since my patients all know that I am a pastor, too, they often request prayer as part of the encounter. I hope they can leave the visit feeling validated as a valued child of God and capable of having a positive effect on their own well-being.”
Despite the differences between life in the United States and Guyana, Young said people “are remarkably the same in our response to God’s love and care in Jesus Christ. This is because all of our needs as humans are so much the same, as is our tendency to sin and fail.”
The ELCA has more than 245 mission personnel serving in 48 countries around the world. Mission personnel are supported through ELCA Missionary Sponsorship — congregations and individuals known as “covenant sponsors” make a prayer, financial and communication commitment to support a specific missionary.
– – –
Information about ELCA Global Mission, the work of ELCA mission personnel and missionary sponsorship is at http://www.ELCA.org/globalmission on the ELCA Web site. “Hand in Hand,” a newsletter and blog about global mission support, is at http://www.ELCA.org/handinhand on the ELCA Web site.