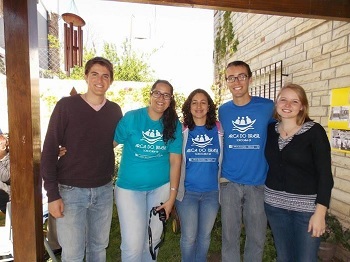 Maddie Tallman, right, with some of the people she works with at El Arca Argentina.

Maddie Tallman is spending a year in Argentina with the ELCA Young Adults in Global Mission (YAGM) program. To learn how to sponsor a participant, see www.ELCA.org/YAGMsupport or contact globalchurch@elca.org.

Cookies, of all things, have been a surprisingly instrumental tool in showing me the path of accompaniment.

The word “accompaniment” was used a lot during both (YAGM) orientations. As missionaries with the ELCA, we are called to live in mutual accompaniment with our host communities. To paraphrase very informally: I bring what I can to the table, you bring what you can, and we all grow together because of it. This concept really excited me! It was so vastly different from the connotation that “missionary” has had in the past. As we prepared to enter our placement sites, I was ready to accompany.

But this was it! This was the exact moment I had been preparing for during orientation, and it was going to happen on the second day. I was accompanying!

I had no idea where we were supposed to sell these cookies that we had made and packaged the morning before. Sandra said Dani, a participant who’s been coming to El Arca since it’s principal days, knew where to go, so I followed.

Dani entered the “kiosko” (sort of like a convenient store) across the street with our basket of cookies. Oh no, the store owner is going to get so mad that we’re in here trying to sell our food in his store. I thought. He’s going to kick us out and it’ll be traumatizing!

Well, I was wrong. We exchanged pleasantries, and the two people behind the counter gawked at the basket, asking for three bags. What? How is this happening? I had no idea.

We left the kiosko with three less bags and 15 more pesos than we entered, walked next door to the “farmacia” (pharmacy/beauty store) and the same thing happened.

We did this approximately a dozen more times. As we wound our way through Boulogne, it was not long before I realized I had no idea how to get back to the workshop center. Dani walked with such certainty that I didn’t even think twice about it. As we approached the workshop center after having sold all the cookies, it struck me that I wasn’t the one accompanying here, I was being accompanied. Dani was the one accompanying me through the town, not the other way around, and not even on a mutual level.

My first few weeks had (and often still have) been very similar to this – most of the time I feel like I was/am beingaccompanied by members of my host community. But as someone who was still very new to this culture, I was/am so grateful and appreciative of the fact that my community around me was willing pull the extra weight.

At this point, the “mutual” aspect of “mutual accompaniment” is starting to push through – and with what else, but cookies.

Maria, an older Chilean woman who lives in my house and one of the nicest people I’ve met so far, often offers me food that she’s prepared. In my stay so far, multiple times she’s given me  empanadas, tortas fritas, baked apples and other desserts. She’s so happy to share what she’s created, and I’m so happy for her kindness (and her excellent cooking!).

The other day, I was finally able to make something that I felt worthy enough to be shared with Maria. I normally make a lot of soups and pasta – not really the easiest thing to share or necessarily good enough either. But after finding a bag of chocolate chips in the store, I made an old classic that I’ve made a hundred times before.

“Ah, gracias!” Maria said when I handed her a napkin with three cookies. “What are these?”

I don’t think I’ve ever met someone who didn’t know what a chocolate chip cookie was upon seeing it. I knew chocolate chips weren’t too common around here, but that surprised me. Chocolate chip cookies were as normal a thing as a peanut butter and jelly sandwich! (Well, that’s also not a common food in Argentina).

But it finally seems like I am bringing my own to the table. What a wonderful feeling it is to give back, ever so slightly, after having received so much hospitality and warmth! I’m just so excited, much like I was in orientation, for the exchanges that will occur during my time here – what will I give of mine and what will I receive of yours? I guess it’s all part of the journey.