Christmas Important for Christians and Muslims Alike in the Holy Land 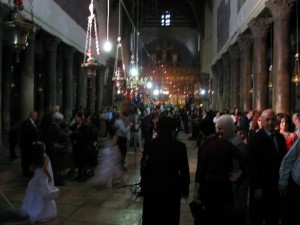 There’s nothing like a quiet visit to the Church of the Nativity a few days before Christmas, before the crowds take it over.  The church has several churches and chapels within it, the most important being the little cave-grotto you descend into where several spots mark the birth of Jesus and where he was laid in the manger.  Old Orthodox lanterns and the smell of oil and candles hang thick in the tiny sacred space.  Usually there is a line to get in, since each group gathers to sing O Little Town of Bethlehem or some other well-known carol, and the sound will echo throughout their memories forever.

But this day I found myself sharing the upper church with four young women, probably in their late teens.  One sat on the empty steps leading up to the sanctuary while another snapped her photo and then a second moved into place.  Then a sudden pause as they spied me standing among the columns on the perimeter– me, just another visitor, but me wearing my black suit and clerical collar, me, as far as they were concerned, a representative of the religious establishment.  After they offered an “Are we going to be in trouble for this?” look, I responded with a smile and nodded for them to continue.  Quickly, the third young woman took her place sitting on the step, posing for the camera, but looking my way hestitating.  I nodded to continue. Then the fourth followed suit.

I decided to walk over to the photographer.  Four figures froze where they stood, offering a worried look.

“If the four of you like, I can take your photo with all four of you together,” I volunteered.

A sign of relief. Then the four of them took a pose before the altar, the cross, the sacred space recognized through the ages by Christians, while I captured a digital memory for their visit on this Dec. 23, when my visit just happened to intersect with theirs.

Did I mention that the four young women were Muslim?  Dressed in bluejeans and headscarfs they thanked me.  “Merry Christmas!” each one said in turn.

“And Merry Christmas to you!” I said knowing the importance of the Prophet Isa to their faith and the significance of the virgin birth for them.  Then I added, “You are always welcome here!”

Christmas in Bethlehem is, of course, like no other place in the world.  At Christmas Lutheran Church, the service is usually in several languages, illustrating that indeed this message is a light to all the nations.  Then the atmosphere out in the streets is more like Mardi Gras than like a somber Christmas atmosphere.  People are laughing, welcoming strangers, all under festive lights in “Manger Square,” the plaza in front of the Nativity Church.  Once you have experienced Christmas in Bethlehem, a piece of your heart will forever remain there on Christmas Eve.

Images of Christmas in the Holy Land 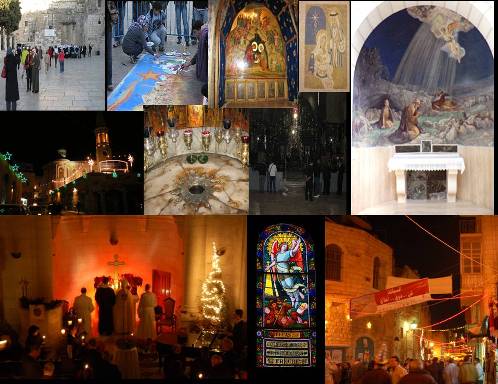