The Rev. Arden and Janna Haug are ELCA missionaries based in Bratislava, Slovakia. Arden is the ELCA’s regional representative for Europe. They have two sons, Vitali and Alexei. To support the Haugs, or another of the ELCA’s nearly 250 missionaries, go to www.elca.org/missionarysponsorship. 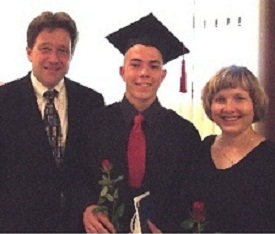 Arden and Janna Haug and their son , Alexei, their most recent high school graduate.

For the Lutheran high schools in Slovakia, the beginning of the school this year was a particularly momentous day. September 2011 marked the 20th anniversary of the reopening of the schools. During the early years of communism, the government closed all religious schools. Church supported schools would allow too many questions to be asked of the communist state.  When the Evangelical Lyceum in Bratislava was re-opened in the fall of 1991, ELCA volunteer teachers were invited to teach English and share the gospel through the English language worship. For 20 years now, ELCA volunteers of all ages have been welcomed to share their gifts in the Slovak Lutheran schools. Today, an entire generation of students has been raised with no memory of communism.

September was also  a new beginning for me personally.  In addition to my work in Bratislava, I am the director of the ELCA Wittenberg Center  in Wittenberg, Germany. As we near 2017, the 500th anniversary of the Reformation, it felt both important and timely for the ELCA to re-establish our presence at the “birthplace of the Reformation.”  I have been traveling frequently to Wittenberg for years, but during the course of the fall, the office of the ELCA Regional Representative will be relocated to Germany. On Reformation Day, October 31, I will preach at the Castle Church, where Martin Luther posted his 95 Theses. Luther is buried in the church. This can make the preacher a bit anxious about the “sinner/saint” turning over in his grave.

We are thankful for your prayers, your interest and your financial support. These continue to be difficult economic times for many ELCA congregations and for many personally.  It is hard to make financial commitments in a time of uncertainty.  But as we pray for the ELCA Global Mission, let us remember the historical tradition of service around the world which has been at the very heart of our call as a church.

2 Responses to 'Celebrating freedom in Slovakia'