Being there for the children

Mary Borgman works with the Diakonia AIDS Ministry in South Africa, which includes an after-school program for children. Many of the children have been affected by AIDS in their families. In a recent entry in her blog she looks back on some important moments in her ministry in 2012. Here is an excerpt about two of the children in the program. To support Mary, or another of the ELCA’s over 200 missionaries, go to www.ELCA.org/missionarysponsorship. 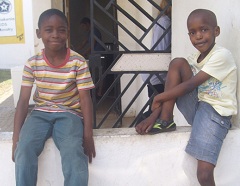 Two boys in the after-school program wait near the kitchen for lunch.

We began the after-school program in August 2011 so the relationship with the children had been deepening for a while. This month (March 2012) several children opened up about their home circumstances. For example, a young boy came into my office to talk with me. He had not eaten the lunch we served at the program because he was saving it for dinner. There was no food at home. His parents had passed away and he lives with his granny, older brother and four younger cousins. At the after-school program children bring their own food container so when there is extra food we can pack dinner for the most needy. He was added to the dinner list.

An older boy came to us about shoes. All the children in South Africa wear school uniforms, which generally require black shoes. The only shoes he owned were school shoes. The sole of his shoe had split at the ball of the foot down the whole shoe, but that’s all he had to wear. We were able to find a special donation of black dress shoes which met the uniform requirements. I have never seen a pair of shoes so appreciated. The boy is the head of a child-headed family, and he cares for his younger brother.

Another special donation of sandals was received in his size. I was going to take the sandals home to wash but when the boy came to the program he was wearing a pair of bed slippers with no sole with a hole in the bottom. I asked why he was wearing slippers when we had just given him shoes. He explained he was not wearing his school shoes because he only wears them at school to make them last. When looking at the situation, it suddenly seemed not quite so important to wash the sandals, and we gave him a little soap to go with them instead. He thought the sandals were so nice. At that time I knew he needed other shoes as we head into winter, but at least we had been able to respond to his needs in some way.

These are just some examples of the challenges children who attend the program face. I was encouraged we had created an environment in which the children felt safe to talk about their concerns. I am saddened by the need in the community but hopeful at the ways God is working in the community.