A new home in Japan

Patrick Meers is teaching English as an ELCA missionary in Japan. To support Patrick, or another of the ELCA’s 230 missionaries, go to www.elca.org/missionarysponsorship. 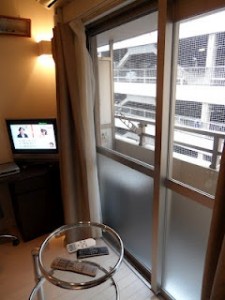 The old apartment with the “amazing” view.

I have recently said goodbye to my old apartment that I had lived in for the first three months of my stay here in Kumamoto. It was a nice apartment with a central location in the city near the Kumamoto castle and mall, so I will miss it a little. I am completely moved into my permanent apartment for the next two years of service here in Japan. It is a lot bigger and has a beautiful view of a small park, a giant improvement over my last apartment that had an amazing view of a towering parking garage.

But the view is not the only amazing part of this apartment. It has a lot of space and is located with all of the other missionaries that I am here with, making it a lot more convenient to get together with other English speakers. This apartment is also fairly close to the school I will be teaching at, Luther Gakuin. I will be teaching English in the junior high and high school at Luther Gakuin. Sometime after I start teaching, April 2, I will give you more information about my classes.

In March Japan had its first anniversary of the March 11, 2011, tsunami and nuclear disaster. Half of the day I was in a nearby city, Fukuoka, and the other half I spent here in Kumamoto. While I was in Fukuoka I visited a church called Tamana Lutheran. The church had a children’s service and an adult service. During the children’s service the mothers of the children performed in a choir some songs from the movie “Sister Act” singing “I Will Follow Him” and “Oh Happy Day” in English and Japanese. The children played rock, paper, scissors after the service and I was asked to join in on the fun.

When I returned to Kumamoto I walked down the long central mall in town and stumbled upon a parade of remembrance for the victims and survivors. All of the TV programs in the morning showed  images of the earthquake and talked about the anniversary. I can still vividly remember what was happening on March 11 last year and when I was in the tsunami hit area of Japan.