A moving farewell in Sierra Leone

At the end of February, the Rev. Kate Warn comes to the end of her three years as an ELCA missionary in Sierra Leone, serving as a pastor in residence. To support any of the other nearly 230 ELCA missionaries, go to www.elca.org/missionarysponsorship. 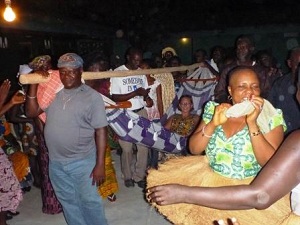 Being carried in a hammock is a great honor.

The past two weeks have been a whirlwind of movement and activity with abundant blessings.

In the midst of it all, the Evangelical Lutheran Church in Sierra Leone (ELCSL) richly blessed me with a night of singing and dancing and traditional ceremonies to bid me farewell as I prepare to leave Sierra Leone on Feb. 27. Out of all the experiences I have had in Sierra Leone over the past three years, the farewell celebration offered by the ELCSL was the most surprising and amazing of all. Special songs of blessing offered by the youth and women still echo in my heart. The sound of drums and the traditional gourd shaker being played still resonate as well.

As the night unfolded, I was quite moved to see Bishop Thomas Barnett of the ELCSL lead a dancing procession of my Lutheran brothers and sisters — coming my way with gifts in hand. As the procession drew near I could also see two men carrying a stout branch across their shoulders, and I wondered what exactly they were bringing. Eventually, I spotted a beautifully woven hammock and began to suspect what was going to happen next.

During this ceremony, Bishop Barnett honored me with the name/title of “first born daughter.”  I was then invited to settle into the hammock. Being carried in a hammock is an honor accorded to chiefs in Sierra Leone, and I felt deeply moved to be acknowledged in this way. I was carried in the hammock, in the midst of drumming, dancing and singing. Eventually I received the hammock as my own, among many other gifts. The blessings of the evening were abundant and memorable — a true reflection of the grace and beauty of the Evangelical Lutheran Church in Sierra Leone.