A hard life but ‘God is good!’

Sam and Cindy Wolf are ELCA missionaries in Kenya. Sam is pastor of Nairobi International congregation and works with the Dagoretti Swahili Church. Sam and Cindy also work in developing an AIDS outreach program. To support the Wolfs, or another of the ELCA’s nearly 250 missionaries, go to www.elca.org/missionarysponsorship. 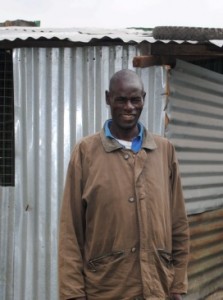 George is a big man with ruggedly handsome features. But his body has been ravished by AIDS. Here in Kenya they call it the wasting disease, and looking at George one can see how it got its name.

George Odhiambo is a member of our English speaking congregation and lives in the slum village behind the church. He was born in a small village near the Uganda border, one of eight children.  The family was fairly well off as his father worked as a butcher, until his father died, and then poverty hit.

After his father’s death, George was forced to drop out of  school. There was no work in the area so George made the 600 kilometer journey to Nairobi and got a job as a life guard at a sports club for expatriates.

He married and had four children. They still lived in the slum, rarely had disposable income but he said, “we ate.”

Then in 2002 his wife got weaker and weaker and died. After her death, George found out she had AIDS.  AIDS carries a horrible stigma in this country. Many people still prefer death to disclosure.  She left George with four children.

Within a year George became too sick to continue working. A social worker convinced him to go to the Coptic hospital, where he was also diagnosed with AIDS. The hospital is now providing him with medicine.

Eventually George found work helping an older neighbor to do his banking. The neighbor promised to pay George but he never did. So George withdrew the money owed to him from the neighbor’s account. He was sentenced to 18 months for theft.  After serving only four months, George was released.  This happened shortly after Cindy and I came to Nairobi International Lutheran Congregation.

He began selling eggs.  He makes less than a dollar a day. Now he and his children eat, but only one meal a day.  For growing children and an adult with HIV who needs to take medicine three times a day with food, this is not a good situation.

George is a wonderful, faithful member of our church.  He is one of those rare people God made who are just good and gentle.  Today we were able to find him a job as a part-time night guard, so perhaps his life shall improve.

I asked George for a statement of his faith.  “Pastor,” he said, “God is good! And God is always!”  I must admit his words somehow made me ashamed.

« Previous Post: Latin American Lutherans in communion with the world

One Response to 'A hard life but ‘God is good!’'