Have someone take some coins from their pocket/wallet/purse and talk about them as a group. 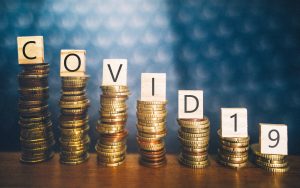 Due to changes in shopping and banking practices during the COVID-19 pandemic, coin circulation patterns have been disrupted, which has led to many stores preferring exact change and electronic payments. Enough coins exist in the country, they just are not circulating in the same ways, since lockdowns began in March of 2020.  This seems to be the result of a combination of factors—businesses being closed, banks having reduced hours, and people avoiding touching public objects (such as coins) in order to slow the spread of the virus.

The Federal Reserve has formed a task force to “mitigate the effects of low coin inventories caused by the COVID-19 pandemic.”  However, officials believe this to be a temporary issue that will resolve itself as restrictions lift and shopping patterns return to normal.

(Text links are to Oremus Bible Browser.  You can find the calendar of readings for Year A at Lectionary Readings.)

The saying goes, “The enemy of my enemy is my friend.”  So, two unlikely groups join together “to entrap [Jesus] in what he said”. The Herodians are supporters of the Roman Empire, while the Pharisees are part of the Jewish temple leadership. They disagree about a lot, but one thing they can agree on is that they are not fans of Jesus. They attempt to put Jesus in a lose-lose situation with the question they pose to him. “Is it lawful to pay taxes to the emperor?”   But Jesus answers stealth-fully and ends up entrapping them in the process.

In order for Jews to comply with the first two of the Ten Commandments (They should  have no other gods or make any graven images), all imprinted money was supposed to be traded in for temple currency before entering the temple complex. The Roman census tax, about which they are speaking, could only be paid with a Roman coin, Most Roman coins contained an image and inscription considered blasphemous by many Jews: Tiberius Caesar Divi Augusti Filius Augustus Pontifex Maximus (Tiberius Caesar, august son of the divine Augustus, high priest) [The New Interpreters Bible Commentary, Volume VIII, p.420].  Therefore, when they hand Jesus a denarius, they show themselves to be breaking the temple rules.  They are trapped instead of Jesus.

Jesus gives a non-answer.  By not giving a “yes” or “no” answer, Jesus avoids angering either those loyal to Rome or the Judean nationalists, who oppose Roman rule. Additionally, his non-answer drives home two points. First, it is lawful, according to the Torah, to pay taxes to foreign governments, like the Roman Empire.  But at the same time, everything is in fact God’s—the creator of everything.  Caesar and everyone else are just temporarily using what is ultimately and always truly God’s.

Martin Luther’s explanation of the Fourth Commandment in the Small Catechism includes “others in authority” (SC I 8) among those whom we are to honor. In the Large Catechism he equates rulers to “fathers of the nation” (LC I 158). However, Luther also charges such authorities to care for those over whom they rule, specifically by ensuring that they receive the daily bread that God provides for them.

This is why Luther writes, in his explanation to the fourth petition of the Lord’s Prayer, “It would therefore be fitting if the coat of arms of every upright prince were emblazoned with a loaf of bread instead of a lion or a wreath of rue, or if a loaf of bread were stamped on coins, in order to remind both princes and subjects that it is through the princes’ office that we enjoy protection and peace” (LC III 75).

Jesus’s answer is really a “yes-but.”  It is our Christian call to participate in government, because it is one avenue by which God’s provision and protection can be distributed to all in need.  Yet, no government is above God, but is but one of God’s earthly tools.

Creator God, you made all things! Thank you for all the gifts that you have entrusted to us—our time, talents, treasures, and power. Guide us in using all that we have for the good of creation and the in-breaking of your kin-dom. Amen.