November 3, 2013–Forgiveness is a Journey

What famous person or celebrity would you most like to meet?   Would it be a current music star or movie star or model?   A public leader like the president or the pope?   A sports hero from one of the teams in the World Series or the upcoming football season?  A TV personality?  A character from a reality show?  Or the star of the latest viral video on Youtube?

Whoever that would be, imagine that this person came to your town and decided to have an open air parade where she would just ride down the street and wave to people with no one holding the crowds back;  people could just come up to her and say hello or climb up on the car or anything.  Keep in mind that this is someone who is probably very, very popular, so the crowd is going to be huge. What do you think your chances would be of getting close enough even to say hello, let alone have a conversation?  That is how a lot of people felt when Jesus came riding through Jericho that day on his way up to Jerusalem.  Because of his miracles and teaching, common people were fascinated with him and religious and political authorities distrusted him, so he was someone a lot of people wanted to see.

Let’s make the situation harder:  The morning of the parade where you are going to see your celebrity, you just sprained your ankle and you’re on crutches, so you can’t even walk up to the parade.  You have to watch from a distance.  Don’t forget:  this is someone you *really* admire and would give anything to meet.  Right when the parade is passing and hundreds or even thousands of people are crowded around, your celebrity looks right at you and points and says, “I have to meet *that* person!”  You – along with everyone else – would be stunned.  How did she even know you?

Let’s make the situation even more complicated yet:  Let’s say you’ve done something – at school or in your community – to make everyone despise you, like you won the lottery by cheating or something like that.  No one can prove it, but everyone knows that it’s true, so they basically hate you.  Now, when the celebrity looks at you and calls your name, the crowd is not only stunned, they’re angry and resentful.  This is very much what the scene would have looked and felt like to Zacchaeus when he saw Jesus pass through Jericho.

Forgiveness is a Journey 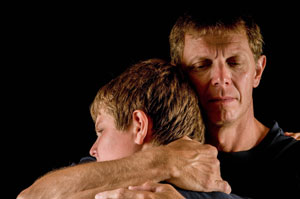 Forgiveness Project.”  The aim of this movement is to collect and share stories where people have found peace and renewed relationships by forgiving someone who has harmed or deceived them.  In some cases, the harm that had been done was quite significant – murder of a loved one, permanent injury, spousal unfaithfulness, squandering all of a family’s resources, and other things like that.

In August of this year a prominent friend of The Forgiveness Project named Anne Gallagher died suddenly, and her death inspired a lot of renewed sharing about her unique ability to bring about reconciliation through forgiveness.  Anne was from Northern Ireland, where she had started her own organization, “Seeds of Hope,” as a way of helping people who have either been victims of the long and violent conflict in Northern Ireland (what the Irish call “The Troubles”) or have been perpetrators of that violence, especially if they have been imprisoned.  Its primary vehicle for forgiveness and healing is shared story-telling.

Anne Gallagher’s gift was somehow to inspire people to see the humanity in every single person, regardless of what terrible things they might have done.  Yet her death has also allowed her friends and followers to recall the importance she attached to forgiveness when reconciliation was the goal.  People could not just start to get along again or pretend that the past did not matter– they had to acknowledge the harm they had done or the harm that had been done to them, and only then, when faced with another person who did not really deserve to be forgiven, could true forgiveness occur and reconciliation follow.

“Forgiveness … is needed to bring closure to the pain and suffering experienced in Northern Ireland,” Anne said. “You can’t contemplate hope unless you address despair. To heal the wounds of Northern Ireland I believe you have to see humanity in the face of the enemy. But forgiveness is a journey. Today you can forgive and tomorrow you can feel pain all over again … for me forgiveness is about grace. To be able to forgive someone who has hurt you is a moment of grace.”

This passage allows us to take up one of several roles, depending on our life circumstance.  For some of us, it is possible to look at things we have done and presume that we are no longer able to be on friendly terms with the “decent” people we know because of our guilt.  Others of us are content to let people who are obviously bad stay out of our lives.  Others of us are – like Jesus – strongly motivated to overcome the divisions we see between people around us.

What a gift Jesus gives us here to pass on, especially if we are someone who is not always on the receiving end of hatred and rejection. We can reach out to those who are. It is possible that they have earned the negative reputation they have, but – like Jesus – we can go to them, not out of moral superiority or in order to demand justice, but just because we want the relationship to be restored.

Who knows what might come of that if it is tried?  And if we are the ones who have been rejected – with or without justification – imagine the joy and gratitude we would experience at being encountered by those who we thought would never have anything to do with us!

Lord Jesus, in your love you have reached out to the lonely, the rejected, and the guilty in every generation, and you have reached out to us as well to announce to us that you intend to come and make your home in our lives and our hearts.  Give us, we pray, the strength to welcome you with repentance and gratitude and courage, so that we may in turn welcome others into the family of Abraham’s children.  In your holy name we pray, Amen.