Where do you get your information each day?  How do you decide whether something you read or hear is true? 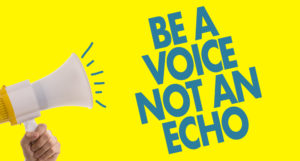 A recent cover story in the The Atlantic, entitled “How Social Media Got Weaponized,” explores how terrorist groups exploit social media platforms such as Facebook and Twitter to spread misinformation, recruit volunteers, and conduct a public relations campaign throughout the world.  The task of such groups is made easier by the fact that we are remarkably resistant to testing the truth of what we read.

One study found that “the likelihood of someone believing and sharing a story was determined by its coherence with their prior beliefs and the number of their friends who had already shared it—not any inherent quality of the story itself.”  In other words we are much more likely to believe things which reinforce our biases and reflect the views of our peers than to allow new information to challenge our beliefs.

This fact is even more troubling when you consider that most of us seek out information from a limited number of sources which tend to support our beliefs.  Not only do we resist believing challenging information, we resist even hearing it.  Some have said this results in the “echo chamber effect;” our pre-existing beliefs reinforce themselves, echoing in our heads until all we hear is what we have spoken into the chamber.

Scholars debate the degree to which this week’s gospel lesson reflects the church’s expectation of an imminent second coming and the degree to which it is trying to offer consolation following the destruction of the Temple in Jerusalem, an event which ushered in massive social, religious, and political upheaval.  The text probably reflects both purposes.

One thing is clear.  We are not the first to live in times of anxiety and transition.  We are not the first to think our world is about to be turned upside down by political forces or personal tragedy.  Nor are we the first to deal with the temptation to obsess about “what might happen.”  Jesus speaks of war, insurrection, conflict, famines, plagues, and what some take to be portents of a dire future—in short, the stuff of our daily headlines or news feed.

With all of this upheaval, Jesus says, you can expect persecution.  In times of crisis and change people get scared—and when they get scared they look for scapegoats.  It is not easy to be the follower of the Prince of Peace when the social climate clamors for law and order.  It is hard to trust God when it feels like the wheels of society are coming off.

But that is exactly what Jesus invites us to do.  “You will be hated by all because of my name.  But not a hair of your head will perish.  By your endurance you will gain your souls.”  This is no glib promise that we will be bullet proof in the face of all adversity, but a promise that whether the fear that haunts us is a cyber-troll or what might happen following an election God will sustain us, if we dare to follow in the way of Jesus.

Our world invites us into echo chambers of fear.  We get stuck in narratives of anxiety, repeating dire predictions of doom to ourselves until they become “truth.”  Jesus invites us to hear another word.  “Peace I leave with you; my peace I give you. I do not give to you as the world gives. Do not let your hearts be troubled and do not be afraid.” (NIV)

Martin Luther is reputed to have said, “If I knew that tomorrow was the end of the world, I would plant an apple tree today!” Church Historian Scott Hendrix has said, “”This statement has not been found in his writings. Scholars believe it originated in the German Confessing Church, which used it to inspire hope and perseverance during its opposition to the Nazi dictatorship.”

Authentic to Luther or not, the saying speaks of acting in hope.  Discuss with your group an action which you might take together to demonstrate confidence in God’s care in times when we are tempted to become fearful and despairing.

Faithful God, who brought all things into being, pushing back the chaos and establishing life on this planet, grant that we may trust to your ongoing care for your creation.  When the foundations of our world shake, give us both the courage to speak your name in hope and the peace to rest in your abiding love.  Amen.