Have you ever experienced the destruction of a place that held emotional significance for you; A home, church, school or city? What was that like and how was it different than the loss of a person?

The city of Detroit, MI is being rebuilt. Many new businesses are popping up in the downtown area and there are plans for a new streetcar line that will transport people from Downtown to Midtown.  Some who fled the city are returning to be a part of the rebuilding of this great American city. There are signs of new life in Downtown Detroit, but areas outside the city center are still in decline. Housing is crumbling with many vacant buildings and lots. One part of the city booms while the rest continues to decline, making the chasm between rich and poor grow. 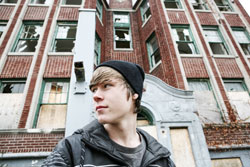 Residents of these outlying areas argue that it will take more than just an infusion of money and industry in one part of Detroit to rebuild this city. Jocelyn Harris has lived in one of those “challenged” outer Detroit neighborhoods, about six miles east of downtown, all her life. “We used to have everything: department stores, grocery stores, all of it,” Harris said. “Now the sewage backs up, the park is locked, the school is closed. If we only had more repair dollars, people could have stayed here. It’s been a lot of fighting just to keep it like this.”

Developer Dan Gilbert has bought up more than 60 buildings in downtown Detroit and has been called everything from a missionary to a super hero-despite the fact that his company has been accused of aggressive sales practice. He and others insist that these pockets of wealth will succeed in rescuing the city and that this boom in economics will have a trickle-down effect on the more challenged areas of the city.

Many who care about the future of this city are working to rebuild it, but not all are in agreement on how that should happen. The decline of this city did not happen overnight, and neither will its rebirth.

This event, often described as Jesus’ cleansing of the temple, is included in all four Gospels so it is safe for us to assume that this is a key moment in Jesus’ ministry.  The temple was a place of worship and also where the community gathered. It was the hub of the Jewish culture at that time with significant spiritual and emotional ties for many. The temple where this story takes place is the second temple. The first was destroyed by the Babylonians in 587 B.C.E. This second temple, constructed after the Jews returned to their land from exile in Babylonia in 539 B.C.E. was leveled by the Romans in 70 C. E. and never rebuilt.

We know that Jesus was not referring to the physical temple building, but his body in John 2:19-21, but those who heard his words that day may have felt that he was threatening to destroy this holy and significant place once again, just to prove a point!

Just as the Jews had suffered the loss of their temple and homeland, many in Detroit are feeling the loss of their city. Jesus’ claim that he could rebuild the temple in three days may have been received with the same offense that many are taking from the “trickle-down” economics being applied in Detroit. It was in part greed that got Jesus so mad about the money changers in the temple. Greed can be a powerful force in a culture and in a city and can play a part in the destruction and rebuilding of temples old and new. Ultimately this story ends with the destruction and resurrection of the temple of Jesus’ body. That is where we must place our hope and trust.

Dear Lord, we thank you for your church, a place where we can gather in community. We pray for this community and for the community of Detroit. Heal what is broken in these places and people. Give us the courage to put our hope and trust in you, and not in the physical things of this world. Amen