If you were to qualify for the Winter Olympics, what event would you want to compete in? 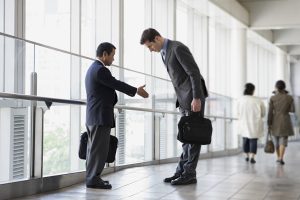 In February, the 23rd Winter Olympic Games were held in PyeongChang, South Korea. Although tickets to the 2018 Games did not sell out, like they have in some years, nearly 1 million visitors, athletes, and support teams traveled to South Korea to participate. Visitors included guests from the 92 nations competing in the games, as well as spectators from non-competing countries. South Korea spent years preparing to host these Winter Games, including participating in high-stakes international talks with delegates from the hostile regime of North Korea, which resulted in the participation of ten athletes and 220 cheerleaders from the North. (Read more about the cheerleaders here http://www.bbc.com/news/world-asia-42616982)

While South Korea was preparing to receive its horde of international visitors, travelers were preparing as well for the particularities of Korean customs. While the South Korean hosts are a gracious and welcoming people, attention to local etiquette goes a long way to help tourist-host relations. When planning a visit to South Korea, here are some things you might want to know:

Last names first. Traditional Korean names list family name first. So if you meet
someone named “Kim” or “Lee,” you should use a Mr. or Ms. in front of it.

Hands to yourself. Unless you have been invited to do so, do not touch your South
Korean hosts. Personal space is highly valued.

Please be seated. In some Korean restaurants, it is not uncommon to be seated on the
floor. But don’t worry – the floor may be heated!

No tipping, please. If you see a “No tipping” sign, don’t tip. Doing so could be
considered offensive.

Four no more. Similar to American unease about the number 13, it is considered unlucky
to mention the number four. Some Korean elevators skip the fourth floor.

Make a joyful noise! Often, after a traditional Korean meal, guests are invited to sing
Karaoke. Refusing to do so may be considered rude.

In addition to learning some traditional South Korean customs, some Olympic Games staff members received training on how not to offend delegates from North Korea. First and foremost, do not mention their leader, Kim Jong Un. And second, don’t bring up nukes! The presence of delegates from the North, including Leader Kim’s sister, Yo Jong, is such a highly sensitive topic, extreme precautions were taken on both sides to avoid adding fuel to the fire of nuclear-armed tensions.

A preacher once said in a sermon, “The Good News is not about being ‘nice’.” In a culture, where we teach children to get along, have good manners, be polite, and “be nice,” this may be a challenge. Certainly, putting the needs of others before our own is a Christian virtue, and adopting a servant-heart can very well result in being a “nice” person, there is much more to it than that. Being an active participant in God’s kingdom-work calls us to respond passionately to the needs and the injustices in the world, and sometimes being passionate does not equate to being polite.

In today’s gospel reading from the Gospel of John, Jesus does not exhibit good manners. Today we encounter an angry Jesus. Jesus comes to the holy city of Jerusalem, to the Temple of God on Mount Zion, and there he meets injustice face to face. Instead of serving the poor pilgrims of Israel who have come to celebrate the Passover, the religious authorities are exploiting them by selling high-priced animals to the pilgrims for their Temple sacrifices. And Jesus gets angry. He gets so angry that he weaves cords together to make a whip and drives the livestock out of the Temple court. He then upends the tables and pours out all the money that had been collected by the vendors and those charging a markup to exchange local currency. Jesus is so passionate for the sanctity of God’s house, seeing it turned into a money-making marketplace makes him seething mad.

We often hear about the “wrath of God,” or God’s “righteous anger.” And here, in this story, we see it in Jesus. Other times in the gospel story, he confronts the religious authorities with strong or harsh language, calling them a “brood of vipers,” “hypocrites,” etc.  It can be difficult for us to think of God’s anger, because anger in humans often originates from sin and also leads to sin. For humans, anger often stems from pride or jealousy, and it often leads to grudges, gossip, or a desire for revenge. But in Jesus’ case, his anger did not stem from sin, instead it is directed towards sin. Because Jesus cares so much about God’s children he cannot stand to see sin hurt them. God’s anger is often called righteous, because it stems solely from the seat of righteousness, not from petty or misdirected desires.

Even though it can be difficult for us to accept, Jesus’ anger can bring us comfort. It’s reassuring to know that our Lord cares enough about us to get angry when we are harmed, abused, or taken advantage of. Given the rampant sin in the world today, it’s probably safe to assume that God does get angry – at school shootings, at child and domestic abuse, at war, at world hunger. It’s ok if we feel angry too, as long as that anger comes from the righteousness of God, and as long as it directs us to positive action, not revenge. Today, it may feel hard to stay nice and quiet and polite. Instead, our passion for justice may call us to stand up, to speak out, and dig in our heels for God’s kingdom-work.

God of justice, ignite our hearts to burn with passion for the work of your kingdom. When we feel angry at others or at the world, ease our minds and hearts, and turn us again to you. When we feel angry at the hurt experienced by your beloved children, direct our energy toward serving, healing, and making a difference in our world for your glory. Amen.