Put Out the Red Carpet 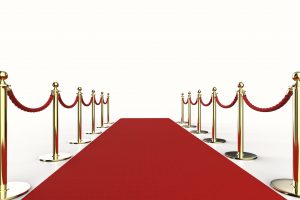 Even before television got involved, the Academy Awards ceremony, held around the first week in March each year, has been preceded by “the red carpet,” where arriving celebrities are greeted by fans and the press as they enter the theater.  This has been going on at the Oscars since roughly 1922, although the tradition of putting out a red carpet as a sign of honoring dignitaries was common in medieval Europe and dates back possibly as far as 5th century BC Greece.

In recent years, the Oscars red carpet has been a place where making political statements has been possible, either by wearing some kind of extra decoration – a ribbon or a badge – or by giving (or denying!) an interview to one of the countless media outlets there.  Sometimes wearing a particular color or style has been taken up as representing support for a particular cause.  In 2018, with several high-profile concerns still in recent memory, including things like MeToo/Time’s Up and gun control, a number of celebrities took the opportunity to make statements, either aloud or symbolically, to call fans and the larger culture to awareness of some of these concerns.

Some history of the red carpet:  https://www.vanityfair.com/hollywood/2014/08/red-carpet-history

Palm Sunday/Sunday of the Passion

Jesus’ entry into Jerusalem a few days before he was to be arrested, tried, and executed shows that he was already well-enough known that his presence could attract a red-carpet-like crowd.  Do we, then, see him using that notoriety to make statements of any kind?  We do, actually, but the messages he sends are subtle and perhaps not obvious to modern readers.

In ancient Israel, animals had some strong cultural associations.  In our own time, think of the lion at the beginning of MGM pictures or German Shepherds as police and military dogs.  From Israel’s earliest days in their promised land, the average subsistence level farming family living in the hilly center of the country would mostly likely have a donkey as one of their agricultural tools, a simple work animal that was stable on a hilly slope and did not require a lot of the farmer’s grain resources to be healthy, reliable, and effective.  Farmers working in flatter areas might use oxen to plow and thresh, but only in the flattest parts of the coastal plain next to the Mediterranean or the flattest valleys in Galilee would horses be present, requiring a lot of grain to be fed and representing military and political power far more than farming.

A king entering either a loyal or a newly-conquered city would almost certainly be seated on a horse.  The prophetic passage that is echoed in this story, however – Zechariah 9:9 – envisions the messianic king not on a horse but on a donkey – a humble hill-dweller’s animal – even on a colt of a donkey, so clearly would this king’s identification with common people be.  And so this king, Jesus, rides into the city not on a horse but very specifically on a donkey colt.

We don’t know exactly what the original onlookers meant when they were throwing branches and coats on the path, shouting “Hosanna!” and proclaiming the rebirth of great king David’s reign from a thousand years earlier.  To be sure it meant that they regarded Jesus as royalty, and “hosanna” basically means “please help (or save),” something that might well be shouted at a king. They could have meant that they were hoping for a revival of those old, glorious days, a rule that would mean the end of the Roman Empire’s occupation and a purification of worship and public life.  Or they could have meant that they understood quite well that this king was going to be different, reigning not from a place of superiority, but from a place of humility.  In either case, Jesus makes no red-carpet-like speeches, choosing rather to return back to his guest house in Bethany and, perhaps, contemplate the painful week that he knew was ahead of him.

Gracious Father, as your Son Jesus prayed to you at all times, but with special urgency during the last week of his life, we ask you to draw us into diligent and attentive prayer this week.  Let this Holy Week become for us a deep root from which a strong tree may grow and flourish.  We pray for all of God’s people in every place, that even if we find ourselves sometimes full of disappointment and hurt, you would turn our voices to Christ in praise and adoration, for he is our king, and we offer our worship, with you and the Holy Spirit.  In Jesus’ name we pray, Amen.