Have you ever encountered a teacher on some other “turf” ­(a grocery store, the mall, a movie, some other place you weren’t expecting to see him/her)? What was your reaction? Did it change the way you thought about him/her? How? Why? 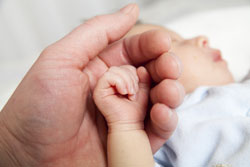 There’s a tough math teacher at St. Francis High School in La Cañada, California. Jim O’Connor is a Vietnam veteran, a no-nonsense educator, and not someone his students were likely to think of as “warm and fuzzy.”

It turns out that there’s a lot more to Mr. O’Connor than meets the eye, at least from his students’ perspective. During a field trip to a children’s hospital to learn first-hand about where school blood drive donations would go, a couple of Mr. O’Connor’s students were surprised when people said, “You go to St. Francis? You must know Jim O’Connor. Isn’t he wonderful?” The young men had no idea what people were talking about, until they learned that Mr. O’Connor has given more blood there than any other donor. In addition, the students found out he spends three evenings a week cuddling sick babies, like he has for the past twenty years. They had had no idea.

One of Mr. O’Connor’s students says that where before he respected him, now he tries to emulate him. Evidently, knowing the “softer side” of their tough teacher has not deflated the students’ opinion of Jim O’Connor.

Read more about Jim O’Connor and his students here: http://articles.latimes.com/2013/dec/23/local/la-me-beat-biggest-blood-donor-20131224

This passage from John includes some of the most familiar verses in the Bible. Unfortunately, more often than not, they are taken out of their context: a pretty interesting conversation between Jesus and a Pharisee named Nicodemus. Nicodemus comes to Jesus at night – because he wanted to avoid detection? because that’s when he had time? because he had not yet been enlightened? – and he tries to understand what Jesus is saying in very literal terms (flesh). Jesus, however, keeps pushing him toward a new way of understanding (spirit). That Nicodemus doesn’t quite “get it” makes Jesus’ point: the kingdom of God is not something one can will one’s own way into; it’s not a matter of deciding, or doing all the right things and avoiding all the wrong ones. Being born of water and the Spirit is God’s work in and on us.

While John 3:16 is one of the most familiar verses in all of Christian Scripture, and is usually shared with the intent of demonstrating the love of God for the world (Martin Luther referred to this verse as “the gospel in miniature”), sometimes people hear it not as a word of hope, but as a word of judgment. Many Christians can tell stories about how the word “Christian” is associated not with grace, love, hope or service, but with judgment, hypocrisy, hatred and meanness.

Evidently enough people have had enough negative experiences with self-proclaimed Christians, that sharing even “good news” is seen as suspect. Perhaps we should always make sure that verse 17 follows verse 16 – Indeed, God did not send the Son into the world to condemn the world, but in order that the world might be saved through him. God is in the saving, loving, forgiving, redeeming and rescuing business. For the sake of the whole world.

Needed: Talk to the pastor ahead of time!

Possible supplies: pitcher and/or bowl; water; towel(s); glass marbles that look like drops of water; ribbon in water colors; shells – there may be no end to the possibilities.

Lord Jesus, you taught Nicodemus. Teach us. Fill us with your Spirit and send us into the world God loves. Amen