Note for leaders: This Faith Lens touches on sexual assault, rape, and the #Metoo movement.  The reflection is about telling difficult truths and being heard. Adult leaders should be prepared in case this topic is personally painful for some in the group.

When someone tells you a story, what makes it sound more or less believable?

On February 24th, Hollywood producer Harvey Weinstein was found guilty of rape and a lessor crime. He has been accused by over 80 women of sexual harassment, sexual assault, and rape. While he is not the only powerful man to have such behavior exposed, he is a famous example and his accusers were instrumental in starting what we now call the #Metoo Era. 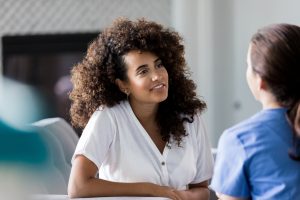 Such crimes are very difficult to prosecute and do not always lead to guilty verdicts and jail time. Cases often come down to whether the jury finds the victims trustworthy, whether they are heard and believed. Many victims of sexual assault never report it because (among other reasons) they are afraid no one will believe them. Those who commit these crimes count on that.  They do everything they can to deny the crime and discredit their victims.   Weinstein’s lawyers used several tactics to discredit the witnesses in his trial, including claiming that the interactions were consensual.

The news of the guilty verdicts, even though it was only on two counts out of dozens of accusations caused celebration among Weinstein’s victims and their supporters. There is increasing hope that victims will be believed when they come forward.  Actress Rosanna Arquette said, “We will change the laws in the future so that rape victims are heard and not discredited.”

You don’t have to be a victim of violence to wonder if the people around you “hear you.” We all need someone who will listen carefully, see us for who we are, believe us when we talk about how we feel, honor our experience, and be on our side no matter what.

Learn more here about why teens specifically do not always report sexual assault).  If you or someone you know has experienced violence, talk to a trusted adult or friend.  You are not alone.

The woman in this story was a Samaritan, an ethnic group that had a complicated relationship with the Jewish people.  They did not trust or like each other, avoiding interaction if possible.  She was also a woman; she wouldn’t normally have a conversation with a strange man in public.  Jesus reveals that she has had five husbands and is currently living with a man to whom she is not married. This probably meant that she was poor and her husbands had either died or abandoned her. She had low status, so the current man in her life felt no obligation to marry her.  She would almost certainly have been dependent on these men for food, shelter, and clothing. She did not have the option to strike out on her own or earn her own income.  While this might not fit modern definitions of sexual assault, she was in a position of catering to their needs (such as getting water for the household in the heat of the day) in order to ensure her own survival. It was not necessarily her choice to be married or living with someone.

Jesus sees her, speaks to her, and understands her.  He sees that she is at the well and in her living situation out of necessity.  He offers her ‘living water’ in place of the water she has to gather every day. She responds with joy and amazement that he is able to tell her everything she had ever done, that he sees who she is and knows her struggles.

With Jesus, we never have to worry that we will not be heard and understood. There is no emotion he doesn’t understand. Instead of shame or doubt, he offers us a way to break the cycle—living water which will quench our thirst. We can experience this through prayer and the people God puts in our lives. Sometimes it feels like no one understands what we are going through. While no other person sees us as completely as Jesus, there are those around us who care enough to truly listen and carefully hold our deepest truths, while we figure out the way forward. Even better, we get to do that for others!

It can be hard at first to listen without imposing ourselves on what others are saying or reacting with our own feelings, instead of considering theirs.  Practice it with your friends and family this week and see what the results are!

Listening God, thank you for knowing us so completely. Thank you for hearing us when we need to be heard.  Thank you for putting people in our lives who care enough to listen.  Help us to be a listening presence for those around us. Amen.