Should a woman with Down Syndrome be allowed to decide where she will live?

Jenny Hatch had a job she loved and had found a new place to live. Her parents had other ideas, but like most other 29-year-olds, Jenny thought her wishes should take precedence. However, because Jenny has Down Syndrome, it wasn’t that simple.

Jenny’s mother and stepfather, Julia and Richard Ross, petitioned a court to be 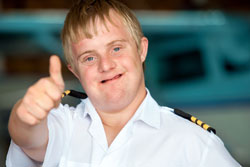 declared guardians of their adult daughter. They wanted to decide where she lived, what medical treatment she received, and who she could see. They felt Jenny would be safest living in a group home.

Jenny had lived in several group homes and didn’t like them. She said they treated her like a child and took away her cell phone and computer. Jenny wanted to live with Kelly Morris and Jim Talbert, friends who also employed Jenny at their thrift shop.

In the end, a judge in Newport News VA ruled that, while Jenny could not live alone, her preferences should be considered. The judge named Morris and Talbert Jenny’s temporary guardians.

Disability rights activists are hailing this as a landmark decision. They hope that other courts will recognize that people with intellectual and developmental disabilities like Jenny can make decisions for themselves.

There must have been great relief for the people in Jerusalem, Judea and around the Jordan who heard John’s words. The time of the Messiah had come, and he would surely wipe out their oppressors and restore Israel.

Matthew tells us that many came to be baptized and confess their sins. But there is also evidence here that the coming of the Christ would not be exactly what the people were expecting.  The Pharisees and Sadducees, although known for their adherence to the Law of Moses, tradition, and ritual, were in for a big shock. By all appearances, these were the most righteous of all. Yet John questions their sincerity and warns them that the one to come will baptize them with the Holy Spirit and with fire.

Some Jews of the time believed that Abraham was so virtuous that he secured a place in the life to come for himself and his descendants. John tells the leaders not to come to him merely going through the motions of confession and baptism and relying on their ancestor Abraham for their salvation. Instead, they must truly repent.  John warns them that absent true repentance the one who is coming will cut them down like trees which do not produce good fruit.

For modern Christians, this scripture offers insight into the purpose of Advent and how we should spend the weeks leading up to Christmas. The kingdom of heaven is at hand, and we must prepare our hearts with repentance to receive the gift of Christ. This cannot be empty ritual.  We risk the fate of the chaff, separated from the wheat and destroyed in the fire.

Unlike John’s audience, we know the good news of the New Testament in which Jesus shows us how to open ourselves to God’s love and live joyfully according to God’s plan. This greatest gift, the presence of God in our world and lives, is what we spend the season of Advent preparing our hearts to receive.

Write your own Advent hymn:

First, consider the message of your hymn. Will it focus on what the arrival of Jesus will bring to the world? Will it focus on how we prepare ourselves for Christmas? Perhaps both, or something else entirely?   Write down some ideas for your hymn and begin to write the poem that will be the lyrics.

Set your words to music. The easiest way is probably to use an existing familiar tune.  The numbers at the bottom right of ELW hymns can help you find possible tunes which match then number of syllables in each line of your poem.

When you’re finished, sing your hymn. Consider including your new song in your worship this Advent season.

Gracious Father, as we anxiously await the celebration of Christmas, help us to remember to spend time preparing ourselves and our world to receive our blessed Messiah. In Jesus’ name we pray. Amen.