A Light in the Darkness

Daniela Schiller is an Israeli Professor of Neuroscience who runs her own research lab at the Icahn School of Medicine at Mt. Sinai in New York City.On June 3rd, 2010 she told a story about a darkness in her own life. 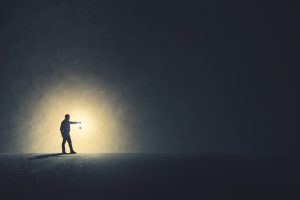 before settling in Israel to raise his family. Daniela visits her father once a year and often her visit coincides with Holocaust Memorial Day. On this day at 10 am, Israeli citizens hear a siren across the country which signals the time to stop everything you are doing and stand at attention for one minute of silent reflection on the horrors faced by Jewish people during World War II. But Daniela noticed that while this national moment of silence was happening, her father (who she thought would want to participate in this national moment more than anyone else) would remain seated at the table, sipping his coffee, and reading his newspaper as if nothing were going on. She always thought this was strange, but didn’t have the type of relationship with her father where she could ask him about his feelings.

Schiller was inspired by a movie called, “Eternal Sunshine of the Spotless Mind,” in which the main character tries to remove the painful memory of his ex-girlfriend through a radical medical procedure. Schiller’s experience growing up with a father who couldn’t seem to acknowledge his most painful memories caused her to research a little bit more about the possibility of such a procedure. It turned out that the movie was based on actual science and there was a lab in New York City working on that specific idea. She immediately signed up and received a grant to study in the lab.

Schiller’s new colleagues had discovered that the simple act of recalling a memory left it vulnerable to influence while it was being loaded in the brain. They imagined allowing people to recall traumatic memories and while the memory was vulnerable, injecting a drug to block the memory from being formed once again, effectively erasing the memory permanently. This had been shown in mice, but now it was Schiller’s job to prove that it was possible in human beings.

Schiller began her experiments by using classical (or Pavlovian) conditioning to force her human subjects to associate seeing a blue square with receiving an electric shock. After a few trials, she was successful and she was able to measure a physiological response of fear in her subjects whenever they saw a blue square. Unfortunately, the US Government was far more lenient regarding the use of electric shocks on humans than with experimental drugs, so she had to come up with a new way to remove the association of fear with the blue square in her subjects.

While reviewing a similar study with mice, which seemed to fail, Daniela noticed that there was something different about this study. After implanting the negative memory in the mice, by mistake the mice were allowed to experience something pleasant in the subsequent iterations of the experiment. This seemed to alter the painful memory over time, and without the use of any drugs, the mice were cured of their irrational fear. So, Daniela began to try this in the people she was studying. By changing from an electric shock to the feeling of winning a prize, she was able to alleviate her subjects’ fear of blue squares.

The next year, while visiting her father, Daniela once again heard the sirens for Holocaust Memorial Day going off. As she looked over at her father, she began to understand what he was doing for the first time. The siren was his blue square and he was was doing something pleasant while his memory was vulnerable. So she poured herself a cup of coffee, borrowed a section of her dad’s newspaper, and sat down next to him.

In the first couple of verses we find out who this John the Baptist character is. We are told very plainly that he is not the light (Christ is!), but that he is simply here to tell us all about the light so we can recognize it when it shows up.

This turns out to be very important because while John is going around telling people about Christ, there is clearly some confusion about who is doing what. The leaders of the Jewish community at the time have trouble keeping John and Jesus separate as they are hearing stories about the two of them. So, they bring John in to ask him a few questions. They want to know just who John thinks he is, causing all this confusion by baptizing people even though he claims not to be Christ, or Elijah, or a prophet. John let’s them know that he is just someone out in the world telling people what they already know: that they should follow the path of God just like Isaiah said and that they needn’t be worried about what he is doing because there is someone coming who even John wouldn’t be worthy of untying his shoe.

As we wait in the season of Advent, we often struggle with balancing “The Christmas Spirit” and the idea that we should be waiting for the light of Christ to shine in our world on Christmas Day. John is very careful to make a distinction between himself and the light. So, are we supposed to see ourselves as John, pointing to the light of Christ in the midst of a broken world? Or are we supposed to be the light ourselves, by being “little Christs” as Luther said in his Theology of the Cross? Is there room for both?

Advent is a season which reminds us that although we live in a world full of darkness and sadness, there is a light and that light comes every year on Christmas Day. Although we look forward to a day when Christ returns and fulfills his Kingdom, we must reconcile this idea with the fact that we live in a world unfulfilled. Can we still point to evidence of Christ in a broken world? Can we tell ourselves and others about the coming Kingdom, even if we can’t see it ourselves? Can we point to God’s light even in the darkest parts of our own lives? Can we take it a step further and be that light to others in their darkest moments?

As Lutheran Christians, we are daily forgiven and washed of our sins. This gives us the freedom to relive the darkest moments of our lives over and over without the fear that we might be forced to be stuck in the darkness. Each time we call on our own fearful and scared memories they are left vulnerable to God’s Word (which is Christ) saying, “I love you and forgive you not in spite of what you’ve done, but because of it.” Christ can keep shining that light through the actions of others (like friends, family, and church members), into our personal darkness. Eventually, this light shines so bright that others can see it in us, despite our own darkness and we become the little Christs that Luther talked about.

Make your own little Christ by drawing something that represents Christ to you. It could be a cross, a dove, a flame, a light bulb, a dude in a robe with a beard, or anything else you can think of. Then take your little Christ with you to a place where you see the light of Christ shining in our broken world. Take a selfie with you pointing to the little Christ and share it on social media with the hashtag #PointingToChrist. Try this more than once throughout your week and don’t forget to search your favorite social media platform for the hashtag to see how others have found the light of Christ in their lives.

Thank you for this chance to come together to learn more about you and your Word. Thanks, also for your willingness to enter into the darkest parts of our lives to shine your light and help us heal. Please walk with us in the weeks, months, and years ahead as we seek out the cracks in the darkness of our world where your light shines through. Allow us to point to that light so that others can see it as well. We lift up the darkness and light in our own lives and know that you hear our prayers, whether we shout them with joy from the mountaintops or hold them inside with sighs to deep for words. Thank you for listening.  Amen.