What’s your favorite Christmas song, and why?

Do They Know It’s Christmastime? (Do We?) 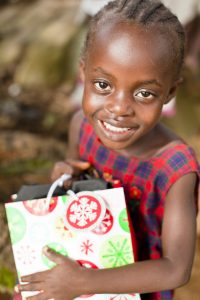 This time of year, it’s hard to avoid hearing Christmas music. One song in steady rotation is the 1980s classic, “Do They Know It’s Christmas?” Originally produced to bring awareness to famine in parts of Africa, it’s a feel-good favorite that connects Christmastime to a concern for those who are hungry. From the Salvation Army bell-ringers to your congregation’s efforts to be generous this time of year, caring for those who are poor at Christmas is a common theme. With a Savior born in a barn to bring good news to the poor, it’s not a bad idea. Yet, some of the lyrics are worth a second glance:

“And the Christmas bells that ring there are the clanging chimes of doom.”

“Well tonight, thank God it’s them instead of you.”

Is there another way for comfortable Christians to be thankful for what we have that doesn’t also involve thanking God that suffering is happening somewhere else, to other people, and not to us?

“And there won’t be snow in Africa this Christmastime.”

That might be true (though not entirely). Not because it never snows on the African continent—it does, although less so each year with a warming climate. It’s most mostly because of geography; the places where it snows in Africa are in the Southern Hemisphere, where it’s summertime on December 25.

“The greatest gift they’ll get this year is life.”

What if all Christians, no matter where they lived, believed that the grace of waking up and breathing in the freedom of being loved and claimed by God is the greatest gift of all? What if there are Christians in Africa who understand this more deeply than some of us could ever imagine?

“Where nothing ever grows, no rain or rivers flow”

Geography again: “Africa” stretches from Senegal in the west to Somalia in the east, from a stone’s throw from Spain (Morocco) and Italy (Tunisia) in the north to Cape Town in South Africa. The USA fits three times inside Africa with room to spare. Madagascar is the fourth largest island in the world (fifth if you count Australia). The continent—especially including Madagascar—is abundant with rivers and rainforests and biodiversity that science cannot yet fully appreciate.

“Do they know it’s Christmastime at all?”

Considering that five of the twenty countries where Christianity enjoys the fastest growth—along with three of the top ten countries with the largest number of Christians—are in Africa, there are millions of folks there who have at least heard that it’s almost Christmastime. Even if many (though by no means all) of them are dealing with war, plague, drought, or famine, they’ll be celebrating the birth of Christ in many and various ways—with or without snow.

As Christians in North America shop ‘til they drop in these last few days before Christmas, this song may lead us not only to be generous, but also to wonder: Do we know it’s Christmastime? And what, exactly, does that mean?

With all the glitz and glamour of our cultural Christmas, it’s hard to remember that the first Christmas was not a tinsel-strewn affair. Jesus arrived on the scene during a time of widespread oppression and fear, among people who teetered on the edge of hunger and poverty, debt and slavery. Mark’s gospel doesn’t tell us about Jesus’ birth; he begins, rather, with the weirdly-dressed John the Baptist preaching repentance and renewal in the wilderness, inviting people to get down in the water and see the world differently. Only with fresh eyes will we be able to see what God is up to in Jesus—the Son of God who is Good News.

And it starts in the wilderness. Mark’s gospel quotes the other reading for this week from the prophet Isaiah. It’s a message of both upheaval and hope—of the new life that comes from carving out a new path. It’s also a lesson in the importance of grammar—namely, punctuation.

“[T]he voice of one crying out in the wilderness:  ‘Prepare the way of the Lord, make his paths straight’” (Mark 1:3)

But Isaiah said this:

“A voice cries out: ‘In the wilderness prepare the way of the Lord, make straight in the desert a highway for our God.’” (Isaiah 40:3)

See the difference? Mark gives us a messenger from out in the wilderness—as if John comes from some weird other place (hence the clothes) to bring a message to the people about getting their house in order.

Isaiah sends everyone out to the wilderness to see the good thing God is doing out there. Or, more accurately, Isaiah knows that his listeners are already in the wilderness, and—contrary to expectations—that is precisely where God is doing a new thing. God has not abandoned God’s people—despite how desperate their plight. Rather, God is in the wilderness, making a way out of no-way, carving out a smooth path for the people of God to walk through the desert in style, all the way home.

If this is what it means to see God coming into the world—what Christmas is actually all about—then the “snow in Africa” song has it entirely wrong, far beyond its woeful misunderstanding of geography: It is precisely the places of famine and fear where Christmas happens first and foremost. “Christmastime” is a wilderness thing.

And John’s message—despite Mark’s misplaced quotation marks—is as important now as it was then: If you want to know what Christ’s coming means, you may need to strip down a bit, get down into the water, walk into the wild, and see the world from the bottom up. “Repent” isn’t a moral thing; it doesn’t mean, “Be a better person!” It’s about perspective: Turn around. Turn your head. See the world differently.

Which might just mean: Look to Africa, not to “help,” but to see how much “they” know exactly what “Christmastime” means, and how much we might have yet to learn.

Explore the African continent using Google, Wikipedia, etc. In small groups, learn three facts about Africa that you honestly didn’t know before. Together as a group, explore https://africa.lutheranworld.org/ to learn more about Lutherans across Africa. Check out https://www.one.org/us/2012/12/17/how-africa-celebrates-christmas-2/ for some great images about Christmas celebrations in Africa. Make a poster or slide show or some way of sharing with your congregation a little bit about what you learned about Africa, African Christmas traditions, and/or African Lutherans.

God, surprise us with your light and life in unexpected places. Help us to learn from friends and neighbors around the world what it means to worship you in the best and the worst of times. Give us new eyes to see you bringing joy to all people, everywhere, even and especially in places where life can be difficult or dangerous. In Jesus’ Name, amen.