When does standing by require standing up?

Standing By and Standing Up

Montgomery County, Maryland is considering a revamped proposal to allow public high school students to take as many as three excused absences a year to participate in political protests and other forms of “civic engagement” during the school day.  This would allow students to take part in marches, protests, lobbying, and other acts of political action. 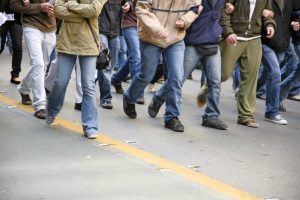 Students feel that many current issues affect them and that students shouldn’t be punished with an unexcused absence for taking part in demonstrations so directly connected to issues affecting their lives.  “We’re taught about how important it is to be engaged in our world and community, and to be aware of what’s going on and to be a responsible participant in the democratic process,” said Ananya Tadikonda, 17, a senior at Richard Montgomery High School and the student representative on the Montgomery County Board of Education. “This proposal gives students an opportunity to exercise civic responsibility without being penalized for it.”

When it was introduced in September, the proposal required parental consent, the approval of the school principal and permission from the organization sponsoring the political activity or protest.  Excused absences would not be approved for spontaneous walkouts or protests. Students who leave campus without receiving approval would not receive an excused absence.  The final version of the proposal is still being drafted.

Public reaction to the proposal has been mixed.  Critics agree that students should have an opportunity to express their concerns, lest students feel their voices do not matter.  But they  express concern that students would be missing out on valuable school time and disrupting the school day.  “You are sending a message to the MCPS community that student protesting is more important than them being at school engaged in learning,” one commentator wrote.

One way to understand and interpret the figure of John the Baptist in the New Testament gospel narratives is to regard him and the movement he generated as a protest against the status quo.  John’s fiery preaching arose from a holy impatience with human complacency toward the evils of injustice and oppression.  He called for repentance, which meant a change of direction in the ways of human behavior and society.  Many of the people who gathered around him were eager to change their own lives in accordance with his preaching and they asked him for instruction on how to do that.  They had, apparently, grown tired of their own complacency and become ready to make changes for the better, changes that would alter the status quo.

We can picture the kind of protests discussed in the preceding news article as similar in sight and sound and character to the gatherings occasioned by John the Baptist.  Both contexts involve impatience with the status quo and calls for change.  Students who might receive an excused absence from class in order to participate in a protest are eager to stand up for the better world they long to see rather than stand by in complacency toward the way things are.

Christians understand themselves to be on “stand by” for the coming of Jesus Christ.  The world’s form and future belong to Jesus rather than to any other person, power, or authority.  The fulfillment of all longing for a better world is assured by the life, death, resurrection and promise of Jesus, and this is the good news that Christians celebrate and confess.  Christians live on “stand by” for the culmination and completion of that good news and Advent is the season in which the church annually re-trains its “stand by” muscles.

Think of a person you know and admire as an example of someone standing up against the status quo.  Share what you know about that person and their actions, and describe how their example has influenced your life.

God grant me the serenity to accept the things I cannot change; courage to change the things I can; and wisdom to know the difference.  Amen – from the “Serenity Prayer” of Reinhold Niebuhr