What’s in a Name?

The cardinals of the Roman Catholic Church elected Cardinal Jorge Mario Bergoglio to be the 266th pope on March 13, 2013. Thousands of pilgrims and tourists crowded the square in front of St. Peter’s Basilica at the Vatican, waiting to learn not only who was elected, but also the name he would take for himself. Since the 11th century it has been customary for a pope to choose a new name upon his election to the office (the first pope to take a new name was elected in the 6th century). 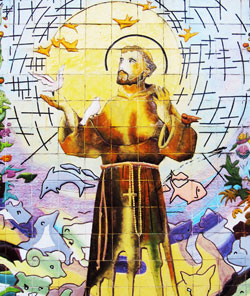 The new pope, former archbishop of Buenos Aires, Argentina, was already known for his love for the poor and his own simple lifestyle. His choice of the name Francis, after St. Francis of Assisi, indicates his intention to continue his focus on and devotion to the poor.

In an interview with journalists from the Vatican and Latin America, Pope Francis said that as the votes stacked up in his favor, a fellow cardinal from Brazil told him , “Don’t forget the poor.”  The new pope added, “Right away, with regard to the poor, I thought of St. Francis of Assisi, then I thought of war. Francis loved peace and that is how the name came to me.”

The new pope said he also thought of St. Francis of Assisi’s concern for the natural environment and how he was a “poor man, a simple man, as we would like a poor church, for the poor.”

This is the first time a pope has chosen the name Francis, and many Catholics, and non-Catholics alike, are hoping Francis’ new name is an indicator of changes and reform to come.

The Gospel according to John doesn’t tell us where Thomas was on the evening of that first day of the week, the day of resurrection. We only know where he wasn’t: in the locked room with the rest of the disciples. Jesus shows up, wounds and breath and all, but when his colleagues give him the play-by-play Thomas simply cannot believe it. He says he needs not only to see, but also to touch, Jesus, in order to believe.

For wanting to experience what the rest of the disciples experienced, Thomas has received the nickname “Doubting Thomas” from history. John never calls him that. According to John, Thomas’s nickname is “the Twin,” though the gospel doesn’t elaborate on why.

A week later Jesus gives Thomas what he asked for and Thomas confesses his faith: “My Lord and my God!” Here, the one who doubts is also the one who believes and proclaims. Jesus, however, does not commend Thomas for this confession. Instead, he pronounces a blessing on those “who have not seen and yet have come to believe,” on us.

God of new life, Jesus breathed the Holy Spirit into his disciples. Send your Spirit also to us, that we who have not seen yet may come to believe that Jesus is the Messiah, the Son of God, and that through believing we may have life in his name. Fill us with your peace, and send us into your world. Amen