What is appealing about fantasy books and movies (or for younger kids, fairy tales)?

Disney’s live-action remake of Beauty and the Beast has surpassed last year’s Finding Dory, which earned $135 million, to take in $170 million in the U.S. on its opening 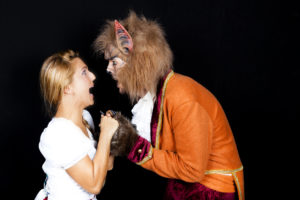 weekend, making it the top-grossing G- or PG-rated movie opener ever. The movie broke other box office records as well, becoming the highest opening for a movie so far in 2017 and the best March release ever. It is also the seventh top-grossing opening weekend for a movie of all time.

Disney has made several of its animated classics into live-action movies in recent years, including Alice in Wonderland, Cinderella, Maleficent, and “The Jungle Book. Upcoming planned releases include Dumbo, Mulan, The Lion King, and Aladdin, among others.

“Nostalgia is a very powerful driver for these films,” Disney head of distribution Dave Hollis said. “What’s exciting here is there is an opportunity to see these beloved stories in a way that’s never been seen before, but you get to build that on the foundation of something that’s very familiar.”

“But you don’t get to $170 million because of nostalgia,” Hollis added. “You have to ultimately make these movies great.” In addition to the record-breaking domestic release, the movie also made another $180 million around the world, and is expected to top $1 billion globally by the end of its run.

The movie featured songs from the original and starred Emma Watson as Belle. It beat out Kong: Skull Island, Logan, Get Out, and The Shack, all of which had debuted in previous weeks. The film follows the story of Belle, an independent, literate woman (who in this version is also an inventor), as she tries to protect her father from the Beast, who she doesn’t know is a prince, cursed by a witch for not being kind to her.

Not only was Jesus’ raising of Lazarus a huge miracle that showed many people he was sent by God, but it also had a profound impact on Lazarus. Lazarus had a second chance at life on Earth—an opportunity that few people get.

The miracle of Lazarus is multi-pronged and has layers of meaning that don’t become clear to Jesus’ followers until after Jesus’ death and resurrection. Looking at Lazarus from beyond the resurrection, it becomes clear that Jesus is sending a message, not only about God’s sovereignty, but about how we are all dead, in a manner of speaking, because of our sins.

Just as Lazarus needed Jesus to raise him up to a new chance at life, we need Jesus to raise us out of the death that our sin brings. We may not all be physically dead, but without Jesus we are spiritually dead and in need of new life.

The Beast needed to earn Belle’s love to redeem his beastly state and make him human again, but Jesus has redeemed us from our fallen state; we need only receive that redemption and new life in faithful trust. There is a shadow of self-sacrifice and grace in many fairy tale stories that gives a glimpse of the real thing, and it is often what touches us in these stories and makes them great.

If your church will let you, host a church-wide movie night where you show one of the following movies that have themes of self-sacrifice or redemption:

Chronicles of Narnia: The Lion, the Witch and the Wardrobe

Ice Age (the original one)

Beauty and the Beast (the animated version)

After the movie, lead a brief discussion into the self-sacrifice/redemption aspect of the movie and how that parallels Christ’s actions for us. Sometimes a concrete example like a movie can help people understand the theology of redemption better.

Lord God, thank you for your gift of redemption that allows us to know you personally and removes the obstacle of sin from our relationship. Help us to share this good news with others so they can come to know you, too. In Jesus’ name we pray, amen.