Signs of the Coming Kingdom? 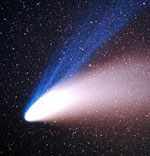 Earlier this month , Asteroid 2005 YU55 passed by the earth at a distance closer than the moon.  NASA’s Jet Propulsion Laboratory announced the following:  “Asteroid 2005 YU55 was discovered Dec. 28, 2005, by Robert McMillan of the Spacewatch Program near Tucson, Ariz. The nearly spherical object is about 400 meters in diameter [i.e., a quarter-mile wide, bigger than an aircraft carrier].   The closest approach will be at 6:28 p.m. today [November 8], when it will come within 80 percent of the distance to the moon.  There is no danger the asteroid will pose a threat to Earth for at least 100 years.   The next approach of a space object as large as Asteroid 2005 YU55 will be in 2028.”   Within days of that event, a passing comet produced an event known as a Taurid meteor shower, producing fireballs in the sky visible in both the northern and southern hemispheres of the earth.

Long before and ever since the birth of Jesus, some people have regarded astral phenomena as signs of an approaching end-time which brings the destruction of the earth and the end of life as we have known it.  Many religious traditions have incorporated such speculation into their understanding of sacred purpose and reality.  Jesus speaks to that interest in our gospel text from the Mark 13, but he cautions us against speculations which distract from the central concerns of faith.  For Christian faith, speculation about the end-time is a trivial distraction from the present circumstances of our life and our world.  When Jesus tells us, “keep awake,” he is not calling us to anxious concern about the end-time but to vigilant exercise of faith in each present moment.  The facts that dazzling astral phenomena can be seen in the skies in every generation and that Jesus speaks to “this generation” help us to understand that focusing our faith on speculation about the future is not nearly as important as engaging our faith in each present moment.  Elsewhere Jesus says, “the kingdom of God has come near” (for example, Mark 1:15).  When he tells us to “keep awake,” he is calling us to pay attention to the nearness of God’s kingdom in the circumstances of our lives, today – and every day.

God, strengthen our faith that we may sincerely pray for the coming of your kingdom, giving us eyes to see its nearness in our lives and in our world.  Teach us to pray daily with all your people: Amen; come, Lord Jesus.