If there anything I learned in my last 5 years in Lutheran academia is that confessions are central. Words matter. They shape realities and transform both perception and perspective. Words are powerful.

Even if they sound made up –or effectively are- words have the power to reclaim identities and shape worlds. For example: Latinamerican. You may read this and think that someone let a typo slip, repeatedly, throughout this blog post. But I chose to use Latinamerican, rather than Latin American, or Latin-American for a reason. Other than Peruvian, latinoamericano –a person from Latinoamerica- is one of the labels I would use “back home” –back home meaning back in a Spanish speaking country- and in Spanish, this word has a unifying sense to it. We may be from different countries but we are one Latinamerica. Latinoamerica unida.

Latin-American, or Latin American on the other hands is defined by Merriam-Webster as: based in or relating to the American countries south of the U.S. where people speak Spanish and Portuguese. You can see how this definition centralizes the United States to define a group of people.

I’m not here for the colonizing narrative, so I hope you can see why I would reject Latin American/Latin American as stubbornly as I do. Every label, every name, every hat, and every mask we pick and accept for ourselves shapes us. That is the power words have in our everyday life.

As I first learned to literally speak new words, I learned and relearned how words hold power -power to acquire, power to release, power to create, and power to destroy. Of course this sounds esoteric when framed like this. Instead, I could have just said that I learned enough English to buy food at a supermarket, words to bless and be a witness to God’s power, to make a phone call or send a letter, enough to have a conversation and make new friends, but also enough language to tell people to stay away, to not harm me or my family, to denounce racism or queerphobia.

If you’ve ever been in a situation where you had to learn a new language, a new culture, and a new code to communicate, you know how empowering and transforming these landmark moments are.

I remember my first word, the first time I truly spoke from my heart in the English language. It happened while hanging out with my friend Donna a good 17 years ago, were instead of calling her by her name to get her attention, I just said “YO!”

It startled me, it surprised me, as this was the first word I spoke without translating, without overthinking which way to say what. Sadly I don’t think I’ve used “yo!” since then –at least not quite like that first time- but I fondly remember it as my first step in a journey to reclaim my voice.

When speaking about, well, *speaking*, sometimes we can see this as something passive, but for people who have lost their voice, for those who have ever been considered “less than”, for the other, for the margins, speaking is not only active but intentional, its sacred, because none of us had the privilege to use our voice as a given. We had to reclaim it. Word by word, space by space, claiming that those words, and their power, are important enough to risk ridicule, violence, or indifference. Every time words are put forward, we assert our place, we claim our seat at the table, not as a guest, but as a host, as someone who will be heard.

So when being all of these things, when one has all of these words, names, masks, hats, applied to them, when one has words to say, it is expected that something will happen. You see, people are afraid of this. This magic, this power to reveal what is preferred to be kept hidden, unnamed and unknown.

Words, as elements that hold power, can be weaponized, and meanings can, and will surreptitiously be used to hold power over one another. Every day we see how #BlackLivesMatter is turned to #AllLivesMatter, how queer is used both as an identifier with rich meaning, and as a slur, how immigrant is used both to disenfranchise people of color and to elevate Europeans who came and keep coming to the United States.

Words matter, they hold power, and they also withhold power when we neglect to say them. When we withhold the blessing of community to others, when we neglect to name others as our equals, as image of God, as co-creators in Christ, we are unable to confess our sins for what they are.

As a person who holds all these names, all these words, all this power, I have to remind myself constantly that even though the church means well, I have the power to change it into something else. I hold the power to create a church where I’m not just an asset, or a blessing, or a resource, but the Church, where I am a child of God created in the image of God, co-creator in Christ. I hold this power to call the church into a revival, and hold it accountable for constantly calling me brave, fierce, or beautiful, but not claiming me as sibling, child of God, or one of their own.

I know the Church is constantly transforming, reforming, and becoming this community, where the power of creation is spoken into reality through all of us. To all my kin, to all my people, to all people of color, immigrants, to all my queer folk, to all my people who are still figuring out their place in the Church, from parishes to synods to seminaries -you have power in every word you speak, you hold magic within you, you, as co-creator in Christ can speak this church into reality, into power, into home.

You are beautifully, wonderfully created in the image of God, co-creator in Christ and bringer of realities, not only into the church but into this world. Words matter. Speak them, slowly, with an accent, mispronounced even, but with the confidence that your words hold power, and in speaking them, you are speaking God’s kingdom into reality. Words matter. Hold your place. You are the Church.

Cesar Abel Arroyo Traverso -prefers to go by Abel- is a candidate for ordination in the Grand Canyon Synod, originally from Lima, Peru. He lives in Phoenix Arizona with his husband Jeff, where he misses the ocean and keeps learning what “dry heat” actually means. Abel is a graduate from the Lutheran School of Theology at Chicago where he got his M.Div 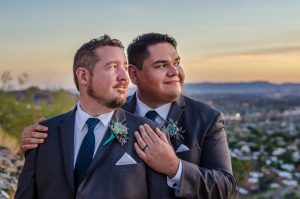 and emphases on both African American and Latinx studies.