On Monday, April 30, 2018, I was asked to accompany Bayron, a man seeking asylum in the US, to his Immigration Court hearing at the Rodino Federal Building, Newark, NJ. Bayron came to the US in 2016 across the Mexico/US border in Texas on foot with a toddler, fleeing violence in Honduras, widely known as one of the homes of the infamous gang, MS-13.  The menace of MS-13 is regularly invoked as a warrant to deport not just gang members, but any undocumented immigrant.  Bayron has no criminal record, yet he is but one of the hundreds of thousands of deportees that, largely based on public discourse about MS-13, have been rounded up by Immigrations and Customs Enforcement (ICE).

Before entering the federal building, we prayed.  Once inside the guard announced, “It’s time to play airport.”  Of course, TSA agents do not carry weapons or wear body armor. By this, they meant that shoes and jackets have to come off, belts, watches, and cell phones need to be deposited into a plastic basket which will be x-rayed, and pockets needed to be emptied.  Then you proceed through a metal detector only to be met by another armed guard on the other side who greets you with a pat down.  Then you put your shoes and other clothing items back on in a chair flanked by two armed guards. Granted, the guards were jovial, but as kind as their intent could have been, it did not outweigh the fire power, controls, and “official” nature of this encounter.

Bayron was shaken up.  He didn’t know if he would be deported, given an ankle monitor, or asked to come back in a week only to face the same terrors all over again.  The building, what and who it represents, is terrifying.  There is no way around that.

After clearing the check-in, and some more prayers, we proceeded to the elevator at the back of the foyer and ascended into the center of a building that some say is the hall of heroes and others the belly of the beast.  Upon reaching the correct floor, a Spanish speaking guard escorted us to the waiting area and asked that we turn our cell phones off in his presence because electronic device use is prohibited in this area.  Upon entering the waiting area, its casino-esque décor was apparent – there were no windows in the room.  And, while there were no slot machines, the whole affair felt more like a game of chance with people’s lives hanging in the balance rather than a judicial affair with lady justice’s scales shaping the outcomes of the proceedings.  This room, absent cell phones, computers, visitors, windows, and even attorneys is a little black box.  It is meant to be as invisible as the population that it serves.  You can’t care about what happens there if you can’t go there, see there, or be there.  Its lack of transparency to the public is essentially due to the same reason a person gets “draped” during surgery:  You don’t want to see it, because if you did, you probably wouldn’t go through with the procedure.

Most of the people in the room were brown or black.  There were a few babies there with their parents.  The youngest baby, in what I think was her father’s arms, was crying and the parents were attempting to sooth the child.  Were the baby’s tears the only thing preventing her parents from crying?

The anxiety in the room was palpable.  Will I have to leave my children behind?  My partner? Family? – today?  These were the questions on people’s faces amidst the somber quiet of insecurity and perhaps terror. In an otherwise starkly adorned waiting area, two portraits gazed upon those who had been caught up in ICE’s dragnet.  The official presidential portrait of Donald Trump and Attorney General Jeff Sessions stared smilingly back at those whose heads hung low.  While President Trump’s Deportation and Removal totals are not yet complied, Presidents’ past have all increasingly ramped up deportations.  President Obama – 3,805,552 deportations.  President George W. Bush – 10,328,850.  President Clinton – 12,290,905.  President George H.W. Bush – 4,161,683.  President Reagan – 8,276,853.  Were we, as Christians, to take these staggering totals as seriously as we take Jesus’ words from Matthew 25:40, “Just as you did it to one of the least of these…you did it to me,” we might be moved to affix these deportation totals to presidential portraits with their deportation tallies placed at the bottom of the photo like the ID# at the bottom of a mugshot.

While the details of this affair are horrifying, they pale in comparison to the circumstances asylees are running from.  That is, it is preferable to endure the horror of being rounded up like an animal in the US than suffer violence back home.

By the grace of God, we were able to procure Bayron an attorney who happened to have a case that same day, at the same time, in the same building.  The attorney, from Catholic Charities, whisked us into a small conference room where he rifled through Bayron’s paperwork and attempted to speak Spanish, which he wasn’t fluent in.  After many failed attempts at communication, a colleague called a friend who spoke Spanish who then proceeded to translate the conversation over the phone.  The guards can speak Spanish, but the attorneys can’t?

The attorney was confounded by Bayron’s disjointed paperwork; he packed in a hurry.  Somewhat flabbergasted and pressed for time, he turned to our group and asked, “How long have you know Bayron?”  We said, “About an hour and a half.”

The attorney sort of chuckled to himself and, watching the clock, pressed on with his questions and sorting.  We knew Bayron for about an hour and a half.  In a roundabout dash of phone calls through networks of colleagues three clergy ended up showing up to accompany Bayron.  That is more than I thought were going to be there. And, when you honestly think about it, considering the 215,000 deportations in 2017, the staggering number of people who need assistance is debilitating.  What can any individual do in the face of so much need?

I get it. And, honestly, that is why I wrote this piece.  I don’t know that I can make a difference on my own. I can’t.  But if enough people know what is going on, then maybe We can.  Every day people are denied due process in little black boxes like this one in Newark, NJ.  Yet, Bayron got a one year stay of deportation.  This is a provisional win.  But, without the attorney from Catholic Charities, the massive networks of activists, and a few willing clergy, Bayron may have been deported that day.  I can’t say that I did it, or that any one thing prevented him from being deported, but what I can say is this:  Bayron knew someone and that someone knew other people who would fight for him to stay.  I am writing this to tell you that that someone can be you.  And, in such a xenophobic context, victory is not always halting a deportation.  Sometimes victory, if we will have any at all, could simply be saying no as loud as you can with as many people as possible.

Carmine Pernini is the pastor of Zion Evangelical Lutheran Church, Rahway, NJ, a member of the NJ Synod’s Anti-Racism Team, a Coordinator for the Union County Interfaith Coordinating Council, a member of Faith in NJ’s Clergy Caucus, and on the Steering Committee of the NJ Clergy Coalition for Justice.  He is married to Rev. Kathryn Irwin, of Holy Trinity Lutheran Church, Nutley, NJ, and they have three children and one on the way. 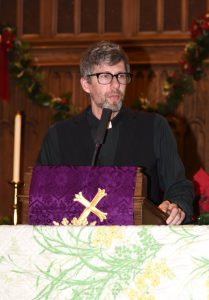