“I Love to Tell the Story” sermon by Rev. Jaime Dubon

Grace and peace to you from God our Father and form our Lord Jesus Christ. Amen

I love to tell the story, because I know ’tis true; It satisfies my longings as nothing else can do.

This is one of my favorite traditional church songs. I wouldn’t do it at a church service full of young people.

The Spanish translation doesn’t have the same emphasis. It says:

There is a person in this very building who firmly believes that “ministry is about relationships” so he starts almost every public speech with the following statement:

Ministry is about relationships.

And I agree with him, not only because relationships are in the heart of ministry, but also because it’s very true when it comes to our Global Mission work.

Oct the 2nd was my very first day in this position. So RMP (Rafael Malpica Padilla, E.D. of Global Mission for the ELCA) took me out to lunch; We all know who RMP is, don’t we? Sorry Rafael, I’m piking on you. My friends, in this building, we have a reputation about the use of acronyms. After two and a half months, I’m still working on them.

Anyway, Rafael took me out to lunch, and at the end of our conversation he told me: “At the end of the day, the work of Global Mission (GM)  is not about what we can teach or the financial resources we can share, but it is about the relationships we develop with our companion churches.”

I do believe in the importance of relationships. In Fact, as we, people of GM, are having this week our “2017 In-House Week” we went out yesterday to bowling, not only as an opportunity to have some fun and relaxation but most importantly as a chance to develop relationships among us. Jesus’ ministry is based on the development of relationships with those people he would encounter.

During this season everyone and everything tell the story: from the Christmas tree, the lights and poinsettias to nature, music, food, business, and of course churches. Even the traditional Mexican posadas and the rosca de reyes (circular bread).

Mexican and many other Latina American countries celebrated yesterday the Virgin of Guadalupe Day on December, 12,  “Today is the feast day of the Virgin of Guadalupe, one of the most important religious holidays in Mexico. The story of her appearance to the indigenous peasant, Juan Diego, is the story of God’s love for the poor and oppressed. May she inspire us to that same kind of love today” (Facebook post from my friend Heidi).

Since everyone and everything tell the story of Jesus and his love; please allow me to tell you a little a story of conviction and commitment:

As a Salvadoran, I had the privilege of being baptized by Father Rutilio Grande, confirmed by Archbishop Oscar Romero, and ordained by Bishop Medardo Gomez. Those who are familiar with the Salvadoran history know what I’m talking about.

Oscar Romero was archbishop of San Salvador from 1977 to 1980. He was assassinated while celebrating the Eucharist in the chapel of the Divine Providence Hospital on March 24 of 1980. The day before his assassination he pronounced the following words, as a calling to the army in the middle of a cruel civil war:

“The law of God should prevail that says: you shall not kill. No soldier is obliged to obey an order counter to the law of God…. We want the government to seriously consider that reforms mean nothing when they come bathed in so much blood. Therefore, in the name of God and in the name of this long-suffering people, whose laments rise to heaven every day more tumultuous, I beseech you, I beg you, I command you in the name of God: stop the repression!” (Mar 23, 1980).

So, the story we need to tell is the one that shows God love and mercy, on one hand, but also that of God’s demand for peace and justice.

It is the story of a God who “has brought down rulers from their thrones but has lifted up the humble.53 He has filled the hungry with good things but has sent the rich away empty.” (Luke 1:52-53).

It is the story of a God who does not tolerate rejection, marginalization, racism, violence and bigotry.

John the Baptist came to announce the coming of the Son of God, but also to call for repentance, conversion and transformation of all structures that promotes suffering and death.

So, my brothers and sisters, ministry is about relationships, it’s about telling the story, and finally, it’s about commitment.

And in our own house, as Christians who claim to be Lutherans and heirs of the reformation we need to honor the principle of being a reformed church always reforming.

Many things need to be reformed in our lives, our church, our country and in our world. As ML King said: “I look to a day when people will not be judged by the color of their skin, but by the content of their character.”

During this season of advent, I invite you to be intentional in developing relationships, in telling the story of Jesus and his love, and in reaffirming our commitment of working and fighting for a better world for our people, the people of God, and for  generations to come. Amen. 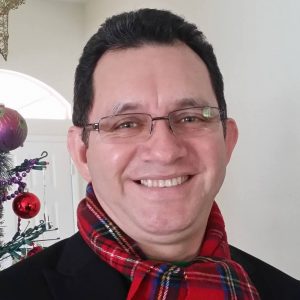 Jaime Dubon is of Salvadoran origin. He has served in different capacities: as congregational pastor in El Salvador and within the ELCA, and as Assistant to the Bishop and Director for Evangelical Mission in the Florida-Bahamas Synod. Currently he serves as the ELCA’s Global Mission Area Desk Director for Latin America and the Caribbean