The Everyday Racism of Covid-19 by Judith E.B. Roberts

I reside in a high-rise apartment building in a racailly and ethically diverse Chicago suburb. My neighbors are American Indian, Black, Puerto Rican, Russian, Assyrian, Asian, Greek and White. We are food service workers, stay at home parents, people with disabilities, college students, musicians, health care professionals, engineers, and retirees. We are families with young children, adults caring for aging parents and adults living alone. We are Muslim, Jewish, Christian, atheist, spiritual and not religious. We are mix of experiences, beliefs, racial groups, ethnic identities sexual orientations and gender expressions. Yet, with all this diversity around me, I was astounded when a neighbor texted an anti-Asian meme to my cell.  I quickly replied back with a concern for her text and the growing anti-Asian sentiment spreading in this country. I have a feeling that I am not alone. Perhaps you have experienced something similar from a friend, a neighbor or relative. You heard the ping of an incoming text, and there it was—a joke, a meme , a  comment from someone that you know, like or love that was racist. I’m not only talking about those only in the dominant white group. It also happens horizontally among and between people of color. Each of us can perpetuate and contribute to the spreading of racist memes, jokes or comments. I call it everyday racism.

With all of us sheltering-in place and social distancing, our reliance on social media, texting and the internet is vital to our existence. We need these platforms to escape the endless news cycles of fear and uncertainty. We need these platforms for comic relief. We need these platforms for our online worship experiences for feeling gathered while we are scattered. As much as I enjoy interacting across these platforms, they can also be sources of threat and harm. The Covid-19 pandemic has heightened anti-Asian racism. Jokes, memes, comments and inaccurate information are responsible for perpetuating negative stereotypes that fuel distrust, anger and fear of and for Asian American lives. In one week, more than 650 Asian-Americans reported acts of racism and discrimination in the online reporting forum #StopAAPIHate. The reports include incidents of verbal harassment; vandalism of property; refusal of service from ride share drivers; to violent physical assaults. Unfortunately, anti-Asian racism is not new. It is baked in U.S. history. The Chinese Exclusion Act of 1882 excluded Chinese immigrants from coming to the U.S. and excluded Chinese nationalist living in the U.S. from becoming citizens. During World War II, 120,000 Japanese Americans were uprooted from their homes and forced into internment camps. Even today, many Asian Americans are still stereotyped as the perpetual foreigner, even though they trace their American roots back generations.

I may not be a person of Asian descent, but I am a Black woman.  I know what everyday racism and sexism feel like. Right now, our siblings in Christ, friends, neighbors, leaders of Asian descent need to know that they are not alone.   Asian American healthcare professionals, teachers, first responders, food service works, pastors, scientists, and volunteers are serving during this pandemic. Many placing their lives at risk in fighting this virus. They don’t need further threats of violence, discrimination or messages of hate.

Our ELCA Baptismal covenant calls us “…to serve all people, following the example of Jesus; and Strive for justice and peace in all the earth.” Confronting racism isn’t easy. Especially when it involves people that we like, love or live next door.  If you see or hear something…say something. Let them know how their words or actions made you feel and that you don’t respond to messages that devalue and cause harm.  If you see something online, flag it. Let social media platforms know that everyone should feel safe online. Lastly, we don’t have to do this alone. Time and time again members across this church have shown up for racial justice. We have marched together for #BlackLivesMatter. We’ve stood shoulder to shoulder in solidarity with our Muslim neighbors. We’ve accompanied migrant minors at the southern border. We’ve condemned white supremacy and declared ourselves a sanctuary denomination.

We have been here before….now, let’s do it again. 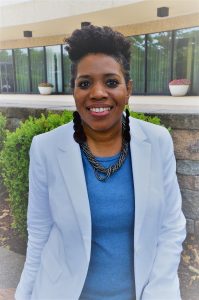 Judith Roberts serves as the ELCA Director for Racial Justice.

That We Might Have Life: Black Healthcare Matters in the Covid-19 Pandemic by Rev. Lamont Anthony Wells | Zooming Toward God’s Love: Reflections on Resilience During Covid Times by Lily Wu