“We are at a 1945 moment” — Those words from António Guterres, Secretary-General of the United Nations, came in a speech on January 10, 2021, marking the 75th anniversary of the first meeting of the U.N. General Assembly. Referencing the moment when the world, emerging from the horrors of World War II, took their first steps into a new era of global cooperation and unity.

It was at this moment, in the midst of one of humanity’s darkest hours, that leaders began to see the world for what it was — an interconnected web of people who possessed similar needs, but also similar hopes and dreams. It was the first time in human history that a unified body representing a majority of earth’s inhabitants would gather under one roof with the purposes of solving its most pressing challenges — the spirit of which is needed now more than ever.

Since 1948, the work of the U.N. has been grounded in one of its most important documents, the Universal Declaration of Human Rights. A professor and dean of the graduate school at the Lutheran Theological Seminary at Philadelphia at the time, Otto Frederick Nolde, was tapped by Eleanor Roosevelt to assist in the drafting of the declaration. 1  Authoring article eighteen, which states that everyone has the right to freedom of thought, conscience, and religion, Nolde helped ensure that faith had a seat at the table. He quickly became the most influential nongovernmental organization representative at the U.N., serving for over two decades in various diplomatic capacities that took him from Manhattan to Moscow.

As the world envisioned new ways of engaging diplomatically, the ecumenical movement was also gaining renewed energy and sense of purpose. A year prior to the start of World War II, 100 churches voted to found what would become the World Council of Churches (WCC) . Its inauguration would be delayed because of the war, eventually launching in 1948. Nolde was selected to lead a new WCC working group called the Commission of the Churches on International Affairs, which advocated for the protection of religious liberty in the broadest possible terms within the U.N. and beyond.

Around the same time, Lutherans throughout the world were embarking on a new journey to become a federated body. The Lutheran World Federation (LWF) was founded in Lund, Sweden, in 1947, taking the place of its predecessor body, the Lutheran World Convention. It was founded to provide a forum for theological and organizational dialogue, but also to coordinate the rebuilding and refugee resettlement efforts in post-war Europe. These founding aims continue to propel the LWF’s work today in responding to the needs of people around the world.

In 1973, the Lutheran Office for World Community (LOWC) was formed to both convey the social policy views of the LWF and eventually the ELCA (after its formation) to the U.N. and, in turn, keep LWF and ELCA members informed about U.N. responses to those issues. Along with the ELCA advocacy, LOWC works to cultivate a publicly engaged church, one that can respond holistically to promote peace and the dignity of all people.

Globally, the LWF, WCC, and other partners continue to serve as catalysts for action and transformation. From the LWF’s Waking the Giant, an ecumenical initiative aimed at building capacity in churches to contribute effectively to the 2030 UN Agenda for Sustainable Development, to the WCC’s Thursdays in Black campaign advocating towards a world without rape or violence, churches are building upon past successes with renewed focus.

Moments like these require new thinking that pushes us beyond current realities. Youth and young adults are staking their role in this process. A recent webinar organized by the LWF, the WCC, and the Network for Religious and Traditional Peacemakers (NRTP), brought together three young interfaith experts to discuss best practices learned during the pandemic. Mr. Fernando Sihotang, human rights and advocacy coordinator for the LWF’s National Committee in Indonesia, spoke about the ways in which the pandemic was pushing people towards a newfound awareness of their interconnectedness, “People joined hand in hand to support each other, to look for undeniable commonalities, instead of debating our differences.”2

Rev. Dr Sivin Kit, LWF Program Executive for Public Theology and Inter-religious Relations, reflected on the importance of this youth-led engagement, “Youth are able to connect the gains we have learned from history and reframe it in more ‘current’ and ‘future’ terms. Current because they are living in such complex world with such intensity that they may alert us to some blind spots… although revisiting and critically reviewing the past is necessary, often youth nudge us all – especially leaders, to be creative, draw on our imagination, and become more action oriented in shaping the future.”

As nations continue to scramble to respond to the COVID-19 pandemic, the inequalities present in our societies and their intersectionality have grown evermore clear. Ecumenical and inter-religious organizations are calling for the needs of the most vulnerable to remain front and center, as their lives and livelihoods are under the greatest threat. The Geneva Interfaith Forum for Climate Change, Environment and Human Rights (GIF), to which both the WCC and LWF are members, submitted a written statement to the 44th Regular Session of the United Nations Human Rights Council which called for the recognition, monitoring and addressing of “the intersections between the Covid-19 pandemic, climate change and human rights.” Whether in our own community, across the country, or around the world, the need for ecumenical and inter-religious collaboration and participation in the public sphere continues to grow.

In the midst of a pandemic, rising tides of religious extremism and nationalism, political unrest, and racial injustice, the U.N. has designated 2021 as the ‘International Year of Peace and Trust.’ It is a time for us to look back and learn from these 75 years of global cooperation and ecumenical and inter-religious collaboration. It is a moment to ask ourselves what God is calling us to next, to seek out new paths that will continue to build trust, unity, and peace in the face of forces that seek to divide. Indeed, we find ourselves at a 1945 moment, a moment that requires us to move more urgently to mutual approaches to common challenges.

The U.N., like any institution, has at times fallen well short of it’s clarion call. And while its missteps in seeking justice and building peace must continue to be critiqued and studied, so too must its successes be celebrated. For progress has taken root over these 75 years, progress that will continue to evolve upon many different paths moving forward. Likewise, ecumenical and inter-religious partners must consider which paths to journey upon together. Wherever these roads lead us from here, may we work to ensure that truth-telling is paramount, that empathy is our guide, and that the dignity of all is recognized as we continue to name and celebrate that which unites us. 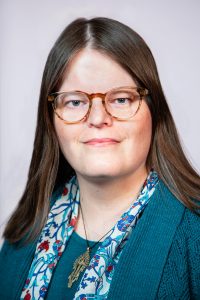 Kristen L. Opalinski serves as the Manager for Ecumenical and Inter-Religious Relations for the ELCA

Neighbors Together in a Divided Nation: An Inter-Religious Conversation | International Day for the Elimination of Racial Discrimination