Pastoral Guidelines for Inter-Religious Observances of 9/11

This year will mark the 20th anniversary of September 11, 2001.  That day holds great significance for people in different ways including the families of those who died in the attacks and in rescue efforts; those killed because of the resulting military conflicts; and those who are/were subsequently targeted because of their religious or cultural identity.

As we prepare for a fall that still seems uncertain, we recall September 2001 and perhaps find an eerie similarity to that time. The events of the last year and a half have upended life and our normal ways of functioning as a global community. The Covid 19 pandemic includes a profound loss of human life, economic hardship and social isolation. Embedded within the pandemic are the omnipresent pandemics of racism, white supremacy and loss of human life due to violence and social and economic inequities. In recent days, we are witnessing tragedy in Afghanistan and the crisis in Haiti in real time. These factors, along with a deep political divide, an increased attention to racial injustice, and a deepening environmental crisis, have rekindled a new sense of urgency.

And yet–this experience also contains moments of hope that are held in tandem with reality: the incredible work of scientists and researchers to create new vaccines and treatments for an emerging disease, the massive efforts of front-line healthcare workers and emergency responders to care for the sick and dying, of activists to give productive voice to profound frustration over justice delayed and denied, of all of us, in ways big and small, to re-invent our lives and our work in the face of deep challenges while also creating new ways of being community.

As we approach the 20th anniversary of 9/11 many of our ELCA congregations, rostered leaders, and others may be thinking about ways to mark and observe this date or may be asked to participate in local 9/11 remembrance gatherings including civic or interfaith gatherings. In the context of uncertainty, this type of gathering may be another way that we hold hope in tandem with reality. As our communities and congregations prepare for this commemoration, there are some resources to help guide this planning with a particular lens towards inter-religious gatherings.

In 2019, the ELCA Churchwide Assembly adopted “A Declaration of Inter-Religious Commitment: A policy statement of the ELCA” (English & Spanish).  We are now actively engaging in the important work of supporting its interpretation and implementation across the church.  A major area of implementation is in local ministry settings, where people experience the day-to-day realities of inter-religious encounter. In these settings, there are a number of “pastoral considerations.”

To aid in this implementation work, Ecumenical and Inter-Religious Relations in the Office of the Presiding Bishop, convened an ad-hoc committee to develop Pastoral Guidelines for Ministry in a Multi-religious world. The committee includes ministry partners from various expressions and networks of the ELCA and ecumenical partners and is advised by the ELCA Consultative Panels on Lutheran-Jewish and Lutheran-Muslim Relations. I am one of the folks to serve on this committee.  While the guidelines are not yet published, I would like to share some excerpts in draft form that can be useful as we prepare for the 20th anniversary observance of 9/11. These are by no means comprehensive of the draft guidelines but touch briefly on a few overarching themes that have emerged as the committee engages its task. I will share excerpts from the guidelines around multi-religious gatherings for Prayer Services and Community Tragedy.

Prayer Services: Building Relationships and Planning as an Act of Love

“Those who have experience in multi-religious gatherings tell us again and again: building relationships with people from other faith communities is a priority. This relationship-building is an ongoing task (and privilege), and it cannot be left to the last minute before trying to do something together. In our ELCA congregations, are we familiar with other religious communities in the places we find ourselves? Do pastors and deacons know the leaders of these communities? Have efforts been made to bring different religious communities together for fellowship, solidarity, and common projects? Have friendships developed across religious lines?

Events that work well are events planned by people who know and trust one another. In the work of planning together, these relationships are deepened”[i]

To begin, this work is grounded in relationship. That should not  be read as an admonition-but as an invitation. In your own community, what does it mean to know your neighbors? How might your congregation or community begin to partner on community initiatives? As I think about this, I recall some pieces of my own career and ministry.  In 2001 my personal and professional relationships looked very different than now. Among my own colleagues, I had few relationships outside of ELCA networks and few outside of Christian communities. In the ensuing years, my work on  college and university campuses has led me deeply into inter-religious engagement. The lens of interfaith and multi-religious engagement is so integral to this work, that it is a part of everything we do. It is characterized primarily by relationships and from relationships come programming. Today, I serve with a multi-religious team of chaplains and much of our shared work as religious leaders is with non-religious constituents. At each level of the work, we are invited into deeper thinking, deeper partnership, deeper advocacy and deeper collaboration with our communities.

“One appropriate response to a community tragedy is to gather to share the sorrow, to lament in a public setting, and to benefit from each other’s support.  When there are diverse religious communities within a city or a neighborhood, this can take the form of an inter-religious service.”[ii]

To be certain, we may not have perfect relationships in place before we need to gather. There is great value in public gathering for acknowledgement, lament, support and advocacy. As a College & University Chaplain, I have always had different levels of commemoration for 9/11. In many ways, these gatherings served as a road map for other gatherings during times of tragedy which seem to occur more and more frequently.

As we think about a commemorative event from a tragedy or a multi-religious prayer service, the draft guidelines offer some other considerations. Special care should be given to the ways in which what is unfolding in Afghanistan impacts the Afghan people, especially women and children, but also Americans and others who are in Afghanistan. We also need to give special care to American Muslim communities, with regard to any possible spike in anti-Muslim bigotry and violence.

”In multi-religious events, we come alongside neighbors from different faith communities with confidence and humility: confident that we have something to share with others, but with humility and respect with regard to what others have to share. We will be on guard against cultural and religious appropriation, avoiding speaking for others and insisting that the participating religious communities represent themselves and their traditions and practices. And we will be on guard against prioritizing one tradition over another, speaking with wisdom, sensitivity, and gentleness (and rejecting the polemics that are too common in our day).

As for individual contributions to the event, it is important that one represent one’s own self (or self-in-community), so that a Christian speaks as a Christian, a Jew as a Jew, and so on. One should not attempt to “fill in” for absent faith traditions (by “Googling a few prayers,” for example). In readings and recitations, chants and hymns and songs, spiritual exercises or prayers, one hopes to experience authentic words and actions that are shared from the heart of the participating traditions…Good relationships enable good planning; and the work of planning and execution leads to the deepening of relationship.”

Finally, a question I’m often asked is’ “Where do we begin this relational work?” Again, this is a space where the draft pastoral guidelines are helpful. 62% of ELCA rostered leader respondents answered “yes” to a survey question that asked “In your role as a rostered minister, have you been involved in any social ministry work with inter-religious partners?” [iii] Social ministry work is a starting point for many shared inter-religious experiences. At Northwestern University, we recently partnered with the Khalil Center to launch the Muslim Mental Health Initiative to better serve students. As a member of the ad hoc committee  working on the guidelines and pastor of the ELCA,  I would be remiss if I did not include in this blog that In March of 2021, the United Nations Human Rights Council received a report that stated “widespread negative representations of Islam, fear of Muslims generally and security and counterterrorism poli­cies have served to perpetuate, validate and normalize discrimination, hostility and violence towards Muslim individuals and communities.”[iv] We can contribute to healthier communities by actively engaging in relational work that dissolves fear and diminishes bigotry and violence perpetrated against our Muslim neighbors. The second report of the 2020 Mosque Survey published last week indicates that 78% of mosques are involved in at least one interfaith activity. This should be an encouragement to us to build even more bridges as we look toward the next 20 years.

As we prepare in our communities and congregations for fall, may we take a moment to observe the 20th anniversary of 9/11 and in doing so actively work to build a future where love and caring holds space for grief and commit to paths of healing for ourselves and others and our world. In doing so, we will continue to hold hope in tandem with reality as we live and serve together with people of all identities.

The ELCA Pastoral Guidelines for Ministry in a Multi-Religious World referenced in this blog in draft form likely will be publicly available in final form in spring 2022. 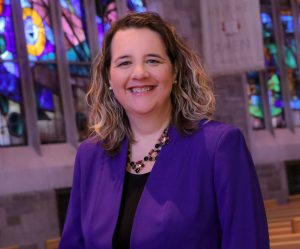 The Rev. Kristen Glass Perez is University Chaplain and Executive Director of Religious & Spiritual Life at Northwestern University.  Kristen is a pastor of the ELCA and previously served as College Chaplain at Muhlenberg College and as Chaplain and Director of Vocational Exploration at Augustana College.  She was also the inaugural Director for Young Adult Ministry for the ELCA Churchwide Organization. She is a member of the Ad Hoc Committee appointed by the Office of the Presiding Bishop to develop pastoral guidelines for ministry in a multi-religious world.