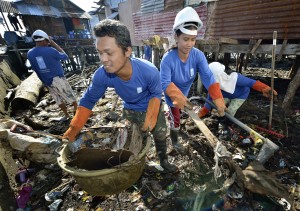 Participants in a cash for work program clean up debris in Tacloban, a city in the Philippines province of Leyte that was hit hard by Typhoon Haiyan in November 2013. The storm was known locally as Yolanda. The ACT Alliance has been active here and in affected communities throughout the region helping survivors to rebuild their homes and recover their livelihoods.

(Photo: Participants in a cash-for-work program help clean up debris in Tacloban, a city in the Philippines province of Leyte. ACT/Paul Jeffrey)

On Nov. 8, 2014, Typhoon Haiyan, known locally as Typhoon Yolanda, crashed into the central Philippines. For the next several days, heavy rainfall and top-speed winds wreaked havoc on the region. The typhoon, one of the strongest recorded storms to ever make landfall, impacted 14 million people, took the lives of 6,300 people, damaged or destroyed 1 million homes and caused $2 billion in damages.

One year later, we take a look back at a busy year of recovering and rebuilding. Thanks to your generosity in giving almost $2.5 million and because of our network of partners on the ground in the Philippines, Lutheran Disaster Response has been active in the recovery since the very beginning. Just days after the typhoon made landfall, we began working with Lutheran World Relief to provide for emergency needs and to help people get back to their homes as soon as possible. Today, we are still in the Philippines and working with Lutheran World Relief and the National Council of Churches in the Philippines to continue the recovery, restoring and rebuilding.

With more than one million homes destroyed or damaged by the typhoon, almost fourmillion people were without shelter after the storm. Within 10 days of the storm making landfall, we were working with Lutheran World Relief to distribute shelter repair kits consisting of plywood, coco lumber, iron roofing sheets, nails, a hammer and a handsaw. Today, more than 26,700 people have received a shelter repair kit.

The storm damaged many water systems, including those for sanitation and safe drinking water. During the past year, more than 240 community water filtration units have been installed and more than 88 wells have been constructed or repaired. In addition to restoring these public water systems, hygiene kits were delivered to more than 65,000 people. We continue our efforts as we work with partners to construct family latrines that will assist more than 11,000 people.

Cash-for-work activities, such as debris removal or cleaning out irrigation canals, were implemented to give people an opportunity to help rebuild their communities while also earn income to provide for their families. Almost 24,000 people have participated.

While people’s homes were damaged by the storm, so were their personal items inside their homes. Many non-food items such as kitchen sets, mosquito nets, baby-care kits and school kits were distributed immediately after the storm to help families with short-term needs. More than 16,000 people received a solar lamp, which serves not only as a light source but also a power-charging station that requires no electricity.

Food shortage continues to be a major concern, even one year after the typhoon. Food sources were depleted after the storm and harvests were interrupted. Working with the National Council of Churches in the Philippines, we will distribute food baskets with rations for two-week periods to more than 20,000 people through the end of January 2015, as needed.

While we continue to assist in the rebuilding and recovery after Typhoon Haiyan, we are also working with the National Council of Churches in the Philippines to help build resiliency with our brothers and sisters in the Philippines. Together, we will construct two multi-purpose community centers and evacuation shelters that will serve as venues for disaster preparedness training workshops in non-disaster times.

The journey of recovery still has a long road, but together, we are making great accomplishments and progress every day. While we lift up prayers for the physical rebuilding that continues to take place in the Philippines, we especially say prayers for the continued emotional and spiritual healing that our brothers and sisters are going through as they remember their loved ones they lost and adjust to their new way of life after Typhoon Haiyan. Your gifts and prayers have made it possible for us to serve as church together during this time of need. Please continue to hold our brothers and sisters in the Philippines in your prayers as we embark with them on this next year of recovery.