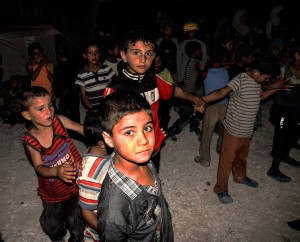 Since the onset of the Syrian conflict in March 2011, the crisis has continued to grow in size and scope. Millions of Syrians are seeking refuge in neighboring countries. In coordination with Lutheran World Federation (LWF), Lutheran Disaster Response is assisting the Syrian refugee population in Za’atri camp, located in northern Jordan. Za’atri camp is hosting approximately 125,000 Syrians, who are all seeking life-saving assistance.

In addition to providing shelter and non-food items, LWF is also implementing psychosocial interventions at Za’atri. In August, LWF hosted a puppet show to raise awareness against gender-based violence. The show was attended by many women and children, who are the most vulnerable among Syrian refugees as they are particularly at risk of sexual harassment and exploitation. The activity provided a fun and safe atmosphere for the attendees.

These refugees have been driven from their homes due to violence and hunger. Through your generous gifts, we are there to provide basic humanitarian needs, and we are also there to implement these important programs that educate about conflict and how to re-build. As security in the area of Za’atri continues to be a concern, these programs can be life-saving. We will continue to work with LWF to provide assistance to this impacted population.