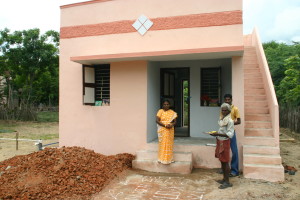 Pictured: A home in the Vellipalayam Jubilee Village. Photo courtesy of Franklin Ishida/ELCA.

It has been ten years since an earthquake struck off the coast of Indonesia on Dec. 26, 2004, and caused a tsunami with waves reaching to 100 feet. The tsunami affected 14 countries and killed more than 230,000 people, making it one of the deadliest natural disasters in recorded history.

The ELCA responded immediately by sending a 15-person delegation to affected areas to express solidarity and meet with partners, and ELCA congregations and individuals responded generously by giving more than $11.4 million for tsunami relief and recovery projects. This support allowed Lutheran Disaster Response to not only take action immediately after the storm but to also accompany our brothers and sisters who were impacted over this past decade as they have journeyed on the long road of recovery.

One location where Lutheran Disaster Response and the greater ELCA have been active is in the Tamil Nadu state in India.

“The ELCA’s response and engagement with the South Asia Tsunami began almost as it occurred,” says Chandran Martin, formerly the executive secretary for the United Evangelical Lutheran Churches in India (UELCI) and currently the ELCA Global Mission regional representative for South Asia. “At the time [of the tsunami], the UELCI, a partner of the ELCA, was responding to the aftermath at the relief stage. Empowered by the solidarity with the ELCA, the UELCI was able to deal with several challenges in planning and operations.”

One such challenge that the UELCI and Lutheran Disaster Response took on was including people who had received little to no assistance, the Dalits, who were then known as “the untouchables” in India’s caste system. In the Tranquebar area, where Lutheran missionaries first arrived in India more than 300 years ago, a Dalit community that was impacted was restored and developed into the Vellipalayam Jubilee Village, where 114 permanent homes were built.

In addition to the new homes in the Vellipalayam Jubilee Village, a sense of identity and self-sustenance was emphasized. Development processes for health and education were put into place, which have promoted health awareness and improved health conditions in the area. Micro-financing and self-help groups were created, which resulted in several job markets, including sewing and metal-working.

These steps helped pave the way for a movement toward greater economic justice in the area, according to Martin. “Through the micro-credit process, seven self-help groups have been formed by women in the area. They are seeking a better livelihood through this process, and the communities are gradually taking control of the processes around them.”

While the rebuilding and construction of the Vellipalayam Jubilee Village has ended, the ELCA continues to walk with our brothers and sisters in India who were impacted by the tsunami as they continue to work on capacity building and sustainability. “The communities in Vellipalayam have truly experienced this solidarity, partnership and accompaniment over the past decade,” Martin says.