Serbia and Bosnia and Herzegovina: Cyclone Results in Record Flooding

​On May 13, 2014, a cyclone hit the areas of Serbia and Bosnia and Herzegovina. During the next few days, the region received more than three months’ worth of rainfall, which resulted in record flooding. More than 80,000 people had to be evacuated, tens of thousands of homes were destroyed or severely damaged, and 53 people were reported dead. Overall, an estimate from the United Nations says that 3.1 million people were impacted by this domino-effect disaster. 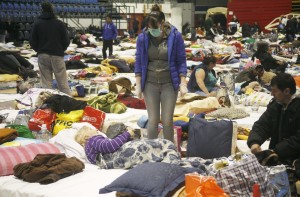 Serbia and Bosnia and Herzegovina have been affected by the cyclone Tamara on May 13. Later on came extremely heavy rain, strong wind and low temperatures. Waters continue to rise rapidly. Severe damages have occured, peole died and many had to be evacuated. ACT members focus on immediate life-saving actions.

As part of the emergency response, Lutheran Disaster Response is providing food, personal health and hygiene supplies, disinfection equipment and tools. These elements are essential since water supplies, and therefore food supplies, have been contaminated as a result of the damage to power and drainage systems caused by the disaster.

Once the emergency response phase is over, there is still work to be done to restore housing and agricultural livelihoods. Lutheran Disaster Response will assist in the reconstruction of buildings and homes, as well as in the rehabilitation of agricultural land and livestock.

Many bridges and roads have been severely damaged or collapsed as a result of the disaster, making it difficult for resources to be delivered. We are committed to providing for those who are most vulnerable in this post-disaster situation, and we will target our resources to those living in the semi-rural locations who are less likely to receive the most immediate attention from other response organizations. During distributions, particular attention will also be focused on people over the age of 60, people with disabilities, female heads-of-households and children.

Flood waters are slowly receding, but the need for assistance is long from over. Lutheran Disaster Response is committed to a long-term response to help impacted families move out of evacuation centers and back into their homes.

Pictured: An evacuation center in Serbia for people who had to leave their homes as a result of the flooding.

Philippines: A second contribution of $1 million to respond to Typhoon Haiyan | Nicaragua: Providing support and recovery materials after the earthquakes