Kenya: Shelter From the Drought 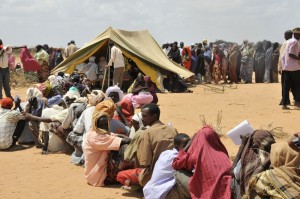 The Lutheran World Federation program working in Kenya and Djibouti just released their annual report for 2011. A major part of their work in 2011 was around the drought which struck the Horn of Africa and the subsequent refugee crisis as the drought mixed with civil unrest in areas of Somalia. The following is one of the story reports giving a view of incoming refugees to the LWF-run camp of Dadaab located in eastern Kenya.

Shelter from the drought

Ahmed has a wife and four children, and that is all.

His family fled hunger in Somalia after the herd of cattle he owned were all gone and there was nothing to feed them. To make the trip, he sold his farm to his extended family and used the money to hire transport at the border to get them to the Dadaab refugee camps in eastern Kenya. Ahmed and his family set out from their home near Baidoa, one of the regions hardest-hit by the famine, but were stuck at the border for quite some time before they finally decided to sell their holdings and buy passage for the journey to Dadaab.

They have lived on the outskirts of the camps for a month and five days. In 2011, over 100,000 people poured into Dadaab, fleeing from drought and violence in Somalia. Some stay with relatives or other families from their clan, but many pitched their tents on the outskirts and stayed there. These tents sat on sandy orange dirt, a long way from water and other amenities.

Those working in the camps were stretched to their limits and beyond trying to meet the needs of this wave of humanity. But refugees and workers alike have had the pressure relieved as those camping on the outskirts were settled into planned camps.

All of the land in and around Dadaab belongs to the Kenyan government, who have generously donated massive tracts for the refugees to settle on. Since mid-August, [Lutheran World Federation] has been relocating refugees living on the outskirts to permanent plots within the official camp.

For people who have experienced so much change and dislocation, there is some resistance to moving again. Some of the refugees need convincing that their new homes will be better than the old. When it came time to decamp from the brushy outskirts of the Hagaderah camp to relocate to the new Kambioos settlement, some Somali refugees wasted no time at all.

Morning cooking fires still smoldered nearby as Abdullah, 50, prepared his donkey cart for the short journey. All around him, other members of this family rolled up mats, folded tarpulins and collected their belongings. Even small children carried their bags to the trucks and buses waiting to ferry them to Kambioos.

“We were fleeing from drought and fighting in Lower Juba,” says Abdullah, who travelled with his wife and their seven children. “I don’t know how many kilometers it was, but it was a very long journey. All of us made it here alive, but some people were very seriously ill when we arrived.”

Their group, which he estimates at one hundred or more, lost eight donkeys along the way. The rest of their livestock perished in the drought before they ever left Lower Juba.

After they arrived, they huddled together in makeshift dwellings outside of the Hagadera camp, where they endured weeks living a long walk away from latrines and a clean water source.

“Water is the main problem,” says one man. “Our family is eight people, and we only get twenty liters for the day.” That’s just 2 ½ liters per person per day; far less than the water used in a single flush of most Western toilets. “We are expecting that life there in Kambioos will be somehow gentler,” said Abdullah.

When the first members of the group arrive at Kambioos after the short bus trip they find sturdy tents erected on well-defined plots, and there is a greater sense of privacy. A large new water tank sits in the middle of the camp atop a pedestal of sand bags, and the camp is outfitted with latrines and other sanitary features.

Afra Mohammed and his family of three are among the first to arrive and he is immediately relieved that they have their own tent instead of sharing with another family.

“We are ready for anything because we are refugees who are looking for a place to settle,” he said. “But I am happy to have this plot.” He echoes the hope of many of the refugees who have fled to Kenya, which is one of stability and a life away from drought and civil war. Ahmed also sounds the same note as the other refugees, “I am not thinking about going back to Somalia. There’s no food to sustain us.”