My name is Matt Ley and I am the Program Interpreter for ELCA Disaster Response. The last weekend in June I was in Minot, ND for the anniversary of the flooding that took place there last year. The horns that signaled the final evacuation blew in the early afternoon of June 22, 2011 and so this date was observed as the official anniversary though the floodwaters stayed for over a month.

It was a bittersweet trip as I had both the joy of reconnecting with those I had met during my last trip in January (along with the joy of meeting more of the amazing cloud of witnesses working there) yet also the pain of seeing how disaster can take it’s toll on both the physical as well as emotional/spiritual landscape of a community. I was many times reminded of something I learned in my Pastoral Care class at seminary: in moments of care it is not the caregiver who bears Christ into the situation but the one who suffers, for that is where Christ is most present. The role of the caregiver is to affirm that presence and help the one who suffers to see it.

This post is a bit later than I was hoping since upon returning there was the need to respond to the newest wave of disasters that hit throughout the US. Yet, in this time I have also been able to look back and reflect upon the days I spent in Minot. In that time I decided to build off this learning from class and do a reflection piece on where I saw Christ present during this anniversary time of looking back and looking forward instead of a traditional report. 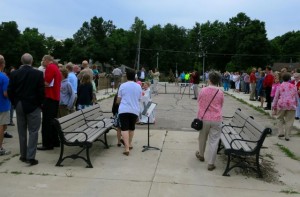 The congregations of First Lutheran and Christ Lutheran, both affected by the flooding gathered for a memorial service at the 6th St bridge, which was underwater during the flooding.

The Ministry of Claiming & Abiding
I saw Christ present in the pastors I met in Minot. Ministry can be taxing in the best of times, so in times of disaster it can at times seem overwhelming. It can seem that one’s faith and ability may not be sufficient for the task of caring for others so in need while also being one of those affected. Yet in those I met I found a deep abiding faith. It was a faith that was able to own the fatigue and tragedy of the situation personally experienced and still (pro)claim Christ’s continuing presence. I affirm Christ in the gift of presence these leaders bring to their community, the gift of suffering with those who suffer while still holding and pointing to the cross. 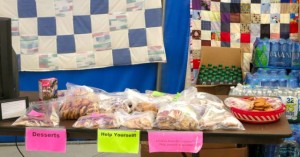 Homemade cookies made by members of the Minot community. These are free for the taking volunteers at Hope Village as a token of thanks.

The Body of Christ in Operation
It was overwhelming to walk into Hope Village and see the buildings that were nothing more than blue prints when I visited in January. To see trailer after trailer, for housing volunteers, for cooking, this one for showers was amazing, all bearing the names of denominations who have helped bring this village to life. It was truly the body of Christ with moving limbs, a sharp mind, breathing lungs and beating heart (along with a full stomach of ever present cookies from a thankful community). As any new body it had moments of learning how to coordinate movement and learn it has. I affirm Christ in the beautiful example of Christ’s people bringing together a greater unity through their diversity of gifts.

Giving From Abundance
Peace Lutheran in Burlington, ND (a few miles outside of Minot) was one of the four ELCA congregations affected by the flood. They have been working with Mission Builders to build a new wing onto their church since they lost the use of their basement in the flooding. One of the aspects of this partnership is that Peace Lutheran agreed to provide a meal each Saturday for the crew of Mission Builders as they worked. The congregation decided this was not enough and opened up the meal to the entire community of Burlington as both a thank you and an invitation. I was able to attend one of these meals and was struck by how something as seemingly as simple as a meal could bear so much import (Last Supper anyone?). I affirm Christ in this act of giving from the gift of abundance even in perceived scarcity. 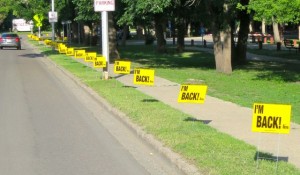 “I’m Back” signs lining the street outside Oak Park.

The Power of Signs
One of the things you might see while driving through Minot are little yellow yard signs. These signs began popping up soon after the flood waters receded with the simple phrase “I’m Coming Back”. They were a simple and profound way for the community to show it’s resiliency and hope. As I attended the opening of Oak Park, one of the main parks in Minot, the entrance road was covered with these signs. Yet, there was one small change, the Coming had been taped over, leaving “I’m Back”. I affirm Christ’s presence in this reminder of a community’s ability for resiliency and hope.

The Spirit’s Permanent Address
The greatest place I saw Christ’s presence was also the most subtle. It was in the seemingly ordinary moments, conversation around plans for future campus ministry, the familiarity of Lutheran liturgy, sitting in and discussing the history of the Stave Church in the Scandinavian Heritage Park, running a 5K with a local pastor who beat me by a step. In these and the many other “ordinary” moments I had was the reminder that though the Spirit may vacation in the miraculous its permanent address is in these day-to-day moments. I affirm Christ in the fact that ministry and life go on in the midst of disaster as the Spirit continues to empower and sustain us.

These are just a few examples of where I saw Christ present in Minot. In them is the reminder that Christ has not forgotten the people of Minot and neither have we. May God continue to sustain us all in the days, months and years to come.

——
To learn how you can continue to support the effort in Minot please check out the Hope Village website for volunteer opportunities and the ELCA Disaster Response website to donate.

Kenya: Shelter From the Drought | Japan: ARI Continues to Meet Needs of the Neighbor