Helping Our Neighbors in Denny Terrace

​This is an article reprinted from the South Carolina Synod website.

Over 5.6 trillion gallons of water fell on South Carolina. They called it the 1000 year storm. My family was blessed because our home was unscathed. Our family members were safe but I yearned to help my fellow neighbors.

We went to check on a church in Denny Terrace and were hit by detour after detour because of washed away roads and breached dams. On our journey down the back roads of North Columbia, we saw remnants of the storm everywhere. Trees strewn all over the roads, debris in the yards and abandoned cars with large orange X’s were all along our path. We saw community members helping each other remove memories from their waterlogged homes. Then, we spotted the man along Crane Creek Road lying in a ditch. He explained that since there was no bus and he had no car, he had to walk, he had fallen into the ditch and may have remained there if we had not passed by. What are the chances that 3 Ministers would be in the car? God was certainly in the midst.

The further we drove, the more we realized the tremendous need in the area. We loaded up the truck and starteddelivering water throughout the community. Who knew that the same water that we drank so freely the week before would be such a commodity. We delivered more than 200 cases of water. While in the community, the one on one conversations revealed the tremendous need that still exist. Houses had been completely covered in water and businesses completely destroyed. 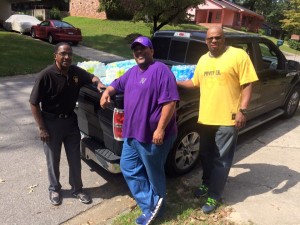 We opened the doors of Christ Mission, a synodically authorized worshiping community, and began accepting donations and distributing the items to the community. While helping the residents with the FEMA applications, we began hearing the stories of the residents who had to be rescued from their attic, picked up by boat, and swam to safety. We helped an elderly man who owned his home and 2 mobile homes, when that was complete he brought his tenant who was deaf and could not speak. 2 hours later, we had his application completed but realized that there were so many services that were needed in the community that were not being provided.

As a mission developer, my favorite scripture is Acts 2:44-47 “All who believed were together and had all things in common; they would sell their possessions and goods and distribute the proceeds to all, as any had need. Day by day, as they spent much time together in the temple, they broke bread at home and ate their food with glad and generous hearts, praising God and having the goodwill of all the people. And day by day the Lord added to their number those who were being saved.” As long as there is a need in the community, the church will be present in the community re-presenting Christ.

Find out more about how you can help here.